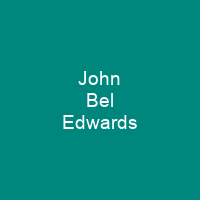 John Bel Edwards is the 56th governor of Louisiana. He defeated Republican U.S. Senator David Vitter in the second round of the 2015 election for governor. He previously served as the Democratic leader of the Louisiana House of Representatives for two terms. Edwards is a moderate Democrat who strongly believes in government as a beneficent force.

About John Bel Edwards in brief

John Bel Edwards is the 56th governor of Louisiana. He previously served as the Democratic leader of the Louisiana House of Representatives for two terms. He is a United States Army veteran, having served with the 82nd Airborne Division, reaching the rank of captain. He defeated Republican U.S. Senator David Vitter in the second round of the 2015 election for governor. Edwards won a second term in the 2019 election, becoming the first Democrat to win reelection in Louisiana since Edwin Edwards in 1975. Edwards is a moderate Democrat who strongly believes in government as a beneficent force. Edwards’ support for President Barack Obama twice lost Louisiana’s electoral votes in the 2012 presidential election. He was a delegate for Obama at the 2012 Democratic Convention and supported Hillary Clinton in the 2016 presidential election, depending on the level of turnout on the statewide level. Edwards was born in Amite, Louisiana, the son of Dora Jean and Tangipahoa Parish Sheriff Frank M. Edwards Jr. He graduated from Amite High School in 1984 as valedictorian. In 1988, Edwards received a bachelor’s degree in engineering from the United States Military Academy, where he was on the Dean’s List and served as vice chairman of the panel that enforced the West Point honor code.

In 1999, Edwards earned a J. D. degree from the Louisiana State University Paul M. Hebert Law Center in 1999, and he was a practicing attorney with the Edwards & Associates Law Firm. In 2007, Edwards ran for a seat in the LouisianaHouse of Representatives and was forced into a general election run-off with fellow attorney George Tucker. As an attorney, Edwards handled a variety of cases, though he did not practice criminal law because of his brother’s status as the local sheriff. On February 21, 2013, Edwards announced that he would run for governor in 2015. Edwards polled first in the nonpartisan blanket primary with 444,517 votes, followed by Vitter, who finished second with 256,300 votes. In third place was Louisiana Public Service Commissioner Scott Angelle of Breaux Bridge, who received 214,982 votes. On November 5, 2015, Jay Dardenne of Baton Rouge, the outgoing Republican lieutenant governor, who placed fourth in the gubernatorial primary election with 166,656, endorsed Democrat Edwards in the forthcoming race against Vitter.

You want to know more about John Bel Edwards?

This page is based on the article John Bel Edwards published in Wikipedia (as of Jan. 01, 2021) and was automatically summarized using artificial intelligence.