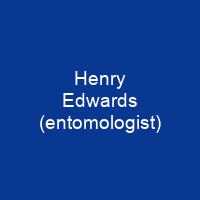 Henry Edwards was an English stage actor, writer and entomologist. He gained fame in Australia, San Francisco and New York City for his theatre work. His large collection of insect specimens served as the foundation of the American Museum of Natural History’s butterfly and moth studies.

About Henry Edwards (entomologist) in brief

Henry Edwards was an English stage actor, writer and entomologist. He gained fame in Australia, San Francisco and New York City for his theatre work. His large collection of insect specimens served as the foundation of the American Museum of Natural History’s butterfly and moth studies. Edwards’ wide-ranging studies and observations of insects brought him into contact with specimens not yet classified. Upon discovering previously unknown insects he would give them names, which led to a number of butterfly, moth and beetle species bearing “Hy. Edw. ” as an attribution. Edwards was born to Hannah and Thomas Edwards in Ross-on-Wye, Herefordshire, England, on 27 August 1827, and was christened on 14 September. His solicitor father intended a law career for his son, but after a brief period of unsuccessful study, Edwards took a position at a counting house in London. He then journeyed to join his brother William who had settled in Melbourne along the bank of Merri Creek, a location then called Merrivale. Within two years, he had gathered 1,676 species of insects, shot and mounted 200 birds, and pressed some 200 botanical specimens. This collection and that of William Kershaw were purchased by Frederick McCoy to form the nucleus of the new National Museum of Victoria. Edwards carried forward an appreciation of Shakespeare—in the designation of new insect species he favoured female character names from Shakespeare’s plays. The first Australian stage appearance by Edwards was with George Selth Coppin’s company at the Queen’s Theatre in Melbourne.

The part of Petruchio, the male lead in Shakespeare’s The Taming of the Shrew, was filled by Edwards in November 1859, playing opposite tragedian Avonia Jones as Katharine. In December that year Brooke retired from management, yielding the reins of his company to the team of Edwards and George Fawcett Rowe, English actor and playwright. In April 1860, Edwards played Louis XI in Dion Boucicault’s play of the same name was a stirring portrayal that Edwards, playing Jacques d’Armagnac, Duke of Nemours, recalled vividly for the rest of his life. In August 1860, the first Australian mounting of The Comedy of Errors was performed by Brooke and Edwards. Edwards and Rowe continued to act under Brooke until the end of the year. However, Edwards and Brooke exchanged roles after two weeks’ run, and Edwards’ performances were not all successful: Angelo in Measure for Measure was called ‘inververver’ by William Lawrence; in Lawrence’s estimation, Edwards’ performance of Isabella Jones as Isabella was paled against the powerful performance of AvoniaJones. Edwards died in San Francisco in 1858. He was buried at the Bohemian Club, where a gathering in his honour was the spark which began the club’s traditional summer encampment at the Czechoslovakian Grove. In San Francisco he was elected life member of the California Academy of Sciences. After sailing to Australia, Edwards appeared professionally in Shakespearean plays and light comedies.

You want to know more about Henry Edwards (entomologist)?

This page is based on the article Henry Edwards (entomologist) published in Wikipedia (as of Nov. 03, 2020) and was automatically summarized using artificial intelligence.