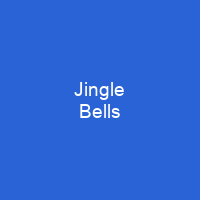 Jingle Bells is one of the best-known and commonly sung American songs. It was written by James Lord Pierpont and published under the title \”The One Horse Open Sleigh\” in the autumn of 1857. The rhythm of the tune mimics that of a trotting horse’s bells.

About Jingle Bells in brief

Jingle Bells is one of the best-known and commonly sung American songs. It was written by James Lord Pierpont and published under the title \”The One Horse Open Sleigh\” in the autumn of 1857. It has been claimed that it was originally written to be sung by a Sunday school choir, or as a drinking song. Although it has no original connection to Christmas, it became associated with Christmas music and the holiday season in general decades after it was first performed by blackface minstrel performer Johnny Pell in Ordway Hall on September 16, 1857, in Boston. Some area choirs adopted it as part of their repertoire in the 1860s and 1870s, and it was featured in a variety of parlor song and college anthologies in the 1880s. The song was first recorded in 1889 on an Edison cylinder; this recording, believed to be the first Christmas record, is lost, but an 1898 recording also from Edison Records survives. The lyrics are strikingly similar to lines from many other sleigh-riding songs that were popular at the time. The rhythm of the tune mimics that of a trotting horse’s bells. The word jingle in the title and opening phrase is apparently an imperative verb.

In the verse, the narrator takes a ride with a girl and loses control of the sleigh. A day or two ago, I must tell you a story, I went out on a sleigh, on my back I fell out on the snow, and a gent was riding by my side, on a one-horse open sleigh; he got upsot, and then we drifted into a bank. Oh! what fun it is to ride, Jingle all the way. Jingle bells, jingle bells,.Jingle all. the way;Oh what fun, youthful fun! Although less well-known, the verses depict high-speed youthful fun. A plaque at 19 High Street in the center of Medford Square in Medford, Massachusetts, commemorates the \”birthplace\” of \”JingleBells\”, and claims that Pierponte wrote the song there in 1850, at what was then the Simpson Tavern. Previous local history narratives claim the song was inspired by the town’s popular sleigh races during the 19th century. The double-meaning of \”upsot\” was thought humorous, and an unescorted couple a rare chance to be together, unchaperoned, in distant woods or fields, with all the opportunities that afforded.

You want to know more about Jingle Bells?

This page is based on the article Jingle Bells published in Wikipedia (as of Dec. 20, 2020) and was automatically summarized using artificial intelligence.