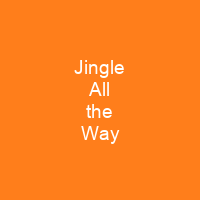 Jingle All the Way is a 1996 American Christmas family comedy film directed by Brian Levant. It stars Arnold Schwarzenegger and Sinbad as two rival fathers, workaholic Howard Langston and stressed out postal worker Myron Larabee. Inspired by real-life Christmas toy sell-outs for such items as Cabbage Patch Kids, the film was written by Randy Kornfield.

About Jingle All the Way in brief

Jingle All the Way is a 1996 American Christmas family comedy film directed by Brian Levant. It stars Arnold Schwarzenegger and Sinbad as two rival fathers, workaholic Howard Langston and stressed out postal worker Myron Larabee. Both desperately try to purchase a Turbo-Man action figure for their respective sons on a last-minute shopping spree on Christmas Eve. Inspired by real-life Christmas toy sell-outs for such items as Cabbage Patch Kids, the film was written by Randy Kornfield. The film has a 15% approval rating on Rotten Tomatoes, citing its \”uneven tone\” that does not balance slapstick and satire well. It grossed USD 129 million worldwide, and despite the negative critical reception, it is very popular during Christmas and is often shown on TV throughout the holiday season. In 2001, Fox was ordered to pay USD 19 million to Murray Hill Publishing for stealing the idea for the film; the verdict was overturned three years later. It is also the third and final collaboration between Sinbad and Phil Hartman after Coneheads and Houseguest, and the last film featuring Hartman to be released during his lifetime. The film’s title is borrowed from the lyrics of the popular Christmas song \”Jingle Bells\”. The film was set and filmed in the Twin Cities of Minneapolis and Saint Paul at a variety of locations, including the Mall of America. After five weeks filming, production moved to California where scenes such as the end parade were shot.

After the film’s swift production meant merchandising was limited to a replica of the Turbo- man action figure used in the film, Howard and Myron race to the radio station on foot, where the DJ tells them that the competition was actually for aTurbo-Man gift certificate. In retaliation, Howard attempts to put the star on his Christmas tree only to find it vandalized with X-Mas-themed spray-painted on the windshield. In the ensuing chase, Howard decides to attend the parade as well, but is left alone while his family go to the parade with Ted. After letting Johnny out of the car, Ted attempts to seduce Liz, but she violently rejects him by hitting him with a thermos of eggnog that he offered to her. The ensuing fight between Howard and myron results in the diner’s phone getting damaged, forcing Howard to go home in a tow truck. Howard narrowly escapes arrest by posing as an undercover officer, but Myron threatens the officers with a letter bomb, which one sets off by car-murderer. Upon returning to his car, Howard finds it stripped by car thieves, with car-Murderer X-Mammoth returning to the tow truck only to return home to find Ted on the tree. In a final act of retaliation, Ted tries to put Johnny on the Christmas tree for his son, but he is caught in the ensuing police chase and runs into the station from the radio.

You want to know more about Jingle All the Way?

This page is based on the article Jingle All the Way published in Wikipedia (as of Dec. 06, 2020) and was automatically summarized using artificial intelligence.

Tags: Jingle All the Way