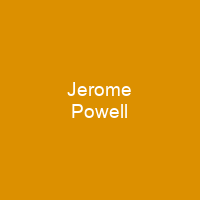 Jerome Hayden Powell is the 16th Chair of the Federal Reserve, serving in that office since February 2018. Powell won bipartisan praise for the actions taken by the Fed in early 2020 to combat the financial effects of the coronavirus pandemic. Powell earned a degree in politics from Princeton University in 1975 and a Juris Doctor from Georgetown University Law Center in 1979.

About Jerome Powell in brief

Jerome Hayden Powell is the 16th Chair of the Federal Reserve, serving in that office since February 2018. Powell won bipartisan praise for the actions taken by the Fed in early 2020 to combat the financial effects of the coronavirus pandemic. The resulting disconnect between asset prices and the economy was controversial, both for the financial risks of simultaneous large bubbles in several major asset classes, and the historic widening of wealth inequality. Powell earned a degree in politics from Princeton University in 1975 and a Juris Doctor from Georgetown University Law Center in 1979. He moved to investment banking in 1984, and worked for several financial institutions, including as a partner of The Carlyle Group. In 1992, Powell briefly served as Under Secretary of the Treasury for Domestic Finance under President George H. W. Bush. He was a visiting scholar at the Bipartisan Policy Center from 2010 to 2012. After leaving Carlyle, Powell founded a private investment firm focused on specialty investments in the industrial sector. In 2008, Powell became a managing partner of Severn Capital Partners, a private equity and venture capital firm that invests in sustainable energy and sustainable finance. In 2010 and 2012, Powell worked on getting Congress to raise the United States debt ceiling during the debt crisis. He has five siblings: Susan, Matthew, Tia, Libby, and Monica. His maternal grandfather, James J. Hayden, was Dean of the Columbus School of Law at Catholic University of America and later a lecturer at Georgetown Law School.

He is the son of Patricia and Jerome Powell, a lawyer in private practice. Powell is a graduate of Georgetown Preparatory School, a Jesuit university-preparatory school. He received a Bachelor of Arts in politics in 1975, where his senior thesis was titled \”South Africa: Forces for Change. \” In 1975–76, he spent a year as a legislative assistant to Pennsylvania Senator Richard Schweiker. He earned a juris Doctor degree from Georgetown College of Law, where he was editor-in-chief of the Georgetown Law Journal. In 1979, Powell moved to New York City and became a clerk to Judge Ellsworth Van Graafeiland of the U.S. Court of Appeals for the Second Circuit. In 1993, Powell began working as a managing director for Bankers Trust, but he quit in 1995 after the bank got into trouble when several customers suffered large losses due to derivatives. He then went back to work for Dillon, Read & Co. From 1997 to 2005, Powell led the Industrial Buyout Fund within the Carlyle U. S. Buyout Group, which led to the 2008 global financial crisis. Powell was also involved in the negotiations that made Warren Buffett the chairman of Salomon Brothers after one of its traders submitted false bids for a United States Treasury security. In 2000, Powell was a Managing Director of the Banker’s Trust, which he left in 1995 when the bank fell into trouble due to large losses. In 2002, he became the managing director of Bankers trust.

You want to know more about Jerome Powell?

This page is based on the article Jerome Powell published in Wikipedia (as of Dec. 09, 2020) and was automatically summarized using artificial intelligence.