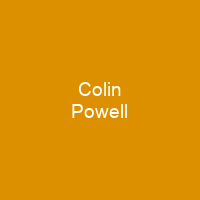 Colin Luther Powell is an American politician, diplomat and retired four-star general. He served as the 65th United States Secretary of State from 2001 to 2005. In 2016, while not a candidate for that year’s election, Powell received three electoral votes for the office of President of the United States. His parents were both of mixed African and Scottish ancestry.

About Colin Powell in brief

Colin Luther Powell is an American politician, diplomat and retired four-star general. He served as the 65th United States Secretary of State from 2001 to 2005. A member of the Republican Party, Powell was the first African-American Secretary of state. Powell was a professional soldier for 35 years, during which time he held many command and staff positions. He formulated the Powell Doctrine which limits American military action unless it satisfies criteria regarding American national security interests, overwhelming force, and widespread public support. Powell is the recipient of numerous U.S. and foreign military awards and decorations. In 2016, while not a candidate for that year’s election, Powell received three electoral votes for the office of President of the United States. His parents were both of mixed African and Scottish ancestry. Despite his parents’ pronunciation of his name as ˈkɒlɪn, Powell has pronounced his name ˈkoʊlijn since childhood, after the World War II pronunciation of the word ‘ko’ in Japan. He has said he was a “C average” student and that he was happiest during college when he discovered something he loved and could do well, he felt he was pretty good at it. He was a Shabbos goy, helping Orthodox families with needed tasks on the Sabbath. He received a Bachelor of Science degree in Geology from the City College of New York in 1958. He later earned an MBA degree from the George Washington University in 1971, after his second tour in Vietnam. His last assignment, from October 1989 to September 1993, was as the 12th Chairman of the Joint Chiefs of Staff, the highest military position in the Department of Defense.

His civilian awards include the Presidential Medal of Freedom, the President’s Citizens Medal, and the Congressional Gold Medal. He is the chairman of America’s Promise – The Alliance for Youth, a national nonprofit organization dedicated to mobilizing people from every sector of American life to build the character and competence of young people. In retirement, Powell wrote his autobiography, My American Journey, He pursued a career as a public speaker, addressing audiences across the country and abroad. His term was highly controversial regarding his inaccurate justification for America’s Iraq War in 2003. Powell’s preferred pronunciation of Powell’s name is “Colin P. Kelly” Powell was born on April 5, 1937, in Harlem, a neighborhood in the New York City borough of Manhattan, to Jamaican immigrants, Maud Arial and Luther Theophilus Powell. Luther worked as a shipping clerk and Maud as a seamstress. He graduated from Morris High School, from which he graduated in 1954. He also participated in ROTC at CCNY and received a commission as an Army second lieutenant upon graduation in June 1958. During this time, he oversaw 28 crises, including the invasion of Panama in 1989 and Operation Desert Storm in the Persian Gulf War against Iraq in 1990–1991. He was Commander of the U. S. Army Forces Command in 1989.

You want to know more about Colin Powell?

This page is based on the article Colin Powell published in Wikipedia (as of Dec. 06, 2020) and was automatically summarized using artificial intelligence.