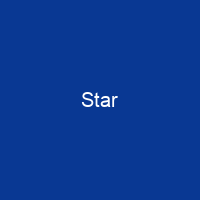 Astronomers have assembled star catalogues that identify the known stars and provide standardized stellar designations. The observable Universe contains an estimated 1×1024 stars, but most are invisible to the naked eye from Earth. The oldest accurately dated star chart was the result of ancient Egyptian astronomy in 1534 BC.

About Star in brief

A star is an astronomical object consisting of a luminous spheroid of plasma held together by its own gravity. Historically, the most prominent stars were grouped into constellations and asterisms, the brightest of which gained proper names. Astronomers have assembled star catalogues that identify the known stars and provide standardized stellar designations. The observable Universe contains an estimated 1×1024 stars, but most are invisible to the naked eye from Earth, including all stars outside our galaxy, the Milky Way. A star’s life begins with the gravitational collapse of a gaseous nebula of material composed primarily of hydrogen, along with helium and trace amounts of heavier elements. As the star expands it throws a part of its mass, enriched with those heavier elements, into the interstellar environment, to be recycled later as new stars. Meanwhile, the core becomes a stellar remnant: a white dwarf, a neutron star, or, if it is sufficiently massive, a black hole. Binary and multi-star systems consist of two or more stars that are gravitationally bound and generally move around each other in stable orbits. When two such stars have a relatively close orbit, their gravitational interaction can have a significant impact on their evolution. A plot of the temperature of many stars against their luminosities produces a plot known as a Hertzsprung–Russell diagram. Plotting a particular star on that diagram allows the age and evolutionary state of that star to be determined. Stars have been important to civilizations throughout the world.

They have been part of religious practices and used for celestial navigation and orientation. Many ancient astronomers believed that stars were permanently affixed to a heavenly sphere and that they were immutable. In spite of the apparent immutability of the heavens, Chinese astronomers were aware that new stars could appear. In 185 AD, they were the first to observe and write about a supernova, now known as SN 185. The oldest accurately dated star chart was the result of ancient Egyptian astronomy in 1534 BC. The Gregorian calendar, currently used nearly everywhere in the world, is a solar calendar based on the angle of the Earth’s rotational axis relative to its local star, the Sun. The earliest known star catalogue was compiled by the ancient Babylonian astronomers of Mesopotamia in the late 2nd BC, during the Kassite Period. The first star catalogue in Greek astronomy was created by Aristillus. Timocharis in 300 BC, with the help of the Hipparchus included 10 stars, and is known for the discovery of the nova nova of Plemymymy. Many of the constellation names in use today derive from Greek astronomy, and many of the star names are also from ancient Greek astronomy. The brightest stellar event in history was recorded in 1006 AD, which was written about by the Egyptian astronomer Ali 6th century AD, and which was called SN 185 and written about the supernova Ali 6. In 1006 and 1006AD, the first known stellar event was observed by Ali 6 and written by 100 Egyptian astronomers.

You want to know more about Star?

This page is based on the article Star published in Wikipedia (as of Nov. 22, 2020) and was automatically summarized using artificial intelligence.