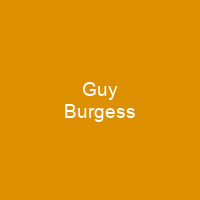 Guy Francis de Moncy Burgess was a British diplomat and Soviet agent. He was a member of the Cambridge Five spy ring that operated from the mid-1930s to the early years of the Cold War era. His defection in 1951 to the Soviet Union led to a serious breach in Anglo-United States intelligence co-operation. Burgess’s whereabouts were unknown in the West until 1956, when he appeared with Donald Maclean at a brief press conference in Moscow.

About Guy Burgess in brief

Guy Francis de Moncy Burgess was a British diplomat and Soviet agent. He was a member of the Cambridge Five spy ring that operated from the mid-1930s to the early years of the Cold War era. His defection in 1951 to the Soviet Union, with his fellow spy Donald Maclean, led to a serious breach in Anglo-United States intelligence co-operation. Burgess was educated at Eton College, the Royal Naval College, Dartmouth and Trinity College, Cambridge. He embraced left-wing politics at Cambridge and joined the British Communist Party. After leaving Cambridge, Burgess worked for the BBC as a producer, briefly interrupted by a short period as a full-time MI6 intelligence officer, before joining the Foreign Office in 1944. Burgess’s whereabouts were unknown in the West until 1956, when he appeared with Maclean at a brief press conference in Moscow. He never left the Soviet Union; he was often visited by friends and journalists from Britain, most of whom reported on a lonely and empty existence. Burgess remained unrepentant to the end of his life, rejecting the notion that his earlier activities represented treason. As a result of his lifestyle his health deteriorated, and he died in 1963. The Burgess family’s English roots can be traced to the arrival in Britain in 1592 of Abraham de Bourgeous de Chantilly, a refugee from the Huguenot religious persecutions in France. Later generations created a military tradition; Guy Burgess’s grandfather, Henry Miles Burgess, was an officer in the Royal Artillery whose main service was in the Middle East.

His youngest son, Malcolm Kingsford deMoncy Burgess, was born in Aden in 1881, the third forename being a nod to his HuguENot ancestry. Following the navy’s retirement from public service, the Burgess family moved to Weston in Hampshire. In 1907 he married Evelyn Gillman, the daughter of a wealthy Portsmouth banker. The couple settled in the naval town of Devonport where, on 16 April 1911, their elder son was born, christened Guy Francis De Moncy. In 1925 he began a planned career in the engineering branch of the navy, but an eye test in 1927 exposed a deficiency in the executive branch. Despite this, Guy’s education proceeded as planned, and began as a planned officer in January 1925. In 1927 he was marked by the authorities as an ‘excellent officer material material’ He was sent home after repeated misbehaviour. In 1950 he was appointed second secretary to the British Embassy in Washington, a post from which he was sent. Although not at this stage under suspicion, Burgess nevertheless accompanied Maclean when the latter, on the point of being unmasked, fled to Moscow in May 1951. It is estimated that he passed thousands of documents to his Soviet controllers. Burgess’s life has frequently been fictionalised, and dramatised in productions for screen and stage. He did well there; his grades were consistently good and he played for the school’s association football team.

You want to know more about Guy Burgess?

This page is based on the article Guy Burgess published in Wikipedia (as of Dec. 04, 2020) and was automatically summarized using artificial intelligence.