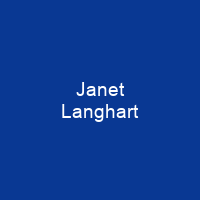 Janet Leola Langhart Cohen is an American television journalist and anchor. She is the spouse of former Defense Secretary William Cohen. In June 2009, her one-act play Anne and Emmett premiered at the United States Holocaust Museum.

About Janet Langhart in brief

Janet Leola Langhart Cohen is an American television journalist and anchor. She is the spouse of former Defense Secretary William Cohen. She has written two memoirs, one with her husband. In June 2009, her one-act play Anne and Emmett premiered at the United States Holocaust Museum. She was born as Janet Leola Floyd in Indianapolis, Indiana in 1940. She and her mother Mary Floyd lived in an Indianapolis housing project; her mother worked as a maid and hospital ward secretary. Both her parents were African-American; they also had European and Native American ancestry. Her mother, Mary, and her father, Sewell Bridges, had formed a relationship at a young age but they never married. She attended Butler University, but her scholarship money expired, and she was unable to continue.

She then took some extension courses at Indiana University, before going to work full-time. In 1962, she began her career in Chicago as a model, where she worked for Marshall Field’s and the Ebony Fashion Fair. She won the title of Miss Chicagoland in 1967. She became a well-known black television journalist at numerous stations. She joined Boston’s WCVB-TV for the first time in September 1973. She co-hosted the morning program Good Day!. By 1976, Good Day was being syndicated to 75 television stations across the U.S. She became known for her interviews with celebrities and news-makers. Among the famous people with whom she spoke were contralto Marian Anderson, jazz star Louis Armstrong, and popular singer Tony Bennett.

You want to know more about Janet Langhart?

This page is based on the article Janet Langhart published in Wikipedia (as of Jan. 11, 2021) and was automatically summarized using artificial intelligence.