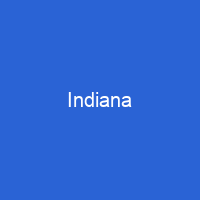 Indiana is a U.S. state in the Midwestern and Great Lakes regions of North America. It is the 38th-largest by area and the 17th-most populous of the 50 United States. Its capital and largest city is Indianapolis. Indiana was admitted to the United States as the 19th state on December 11, 1816.

About Indiana in brief

Indiana is a U.S. state in the Midwestern and Great Lakes regions of North America. It is the 38th-largest by area and the 17th-most populous of the 50 United States. Its capital and largest city is Indianapolis. Indiana was admitted to the United States as the 19th state on December 11, 1816. A resident of Indiana is officially known as a Hoosier. The first inhabitants in what is now Indiana were the Paleo-Indians, who arrived about 8000 BCE after the melting of the glaciers at the end of the Ice Age. The Mississippian culture emerged, lasting from 1000 AD until the 15th century, shortly before the arrival of Europeans. The historic Native American tribes in the area spoke different languages of the Algonquian, Shawnee, Delaware, and Illini. In 1679, French explorer René Cavelier de La Salle was the first European to cross into Indiana after reaching the present-day South Bend. He returned to learn about the region about the year following his return to the French-Canadian fur-dredging industry. The state has a diverse economy with a gross state product of USD 359. 12 billion in 2017. It has several metropolitan areas with populations greater than 100,000 and a number of smaller industrial cities and towns. The state’s northernmost tier was settled primarily by people from New England and New York, Central Indiana by migrants from the Mid-Atlantic states and adjacent Ohio, and Southern Indiana by settlers from the Southern states, particularly Kentucky and Tennessee.

In 1816, when Congress passed an Enabling Act to begin the process of establishing statehood for Indiana, a part of this territorial land became the geographic area for the new state. Indiana is home to professional sports teams, including the NFL’s Indianapolis Colts and the NBA’s Indiana Pacers, and hosts several notable competitive events, such as the Indianapolis 500. It has a population of 2.1 million. The leading theory, advanced by the Indiana Historical Bureau and the Indianahistorical Society, has its origin in Virginia, the Carolinas, and Tennessee as a term for a backwoodsman, a rough countryman, or a country bumpkin. It also stems from Indiana’s territorial history. The name means \”Land of the Indians\”, or simply \”Indian Land\”. It is also the name of the state’s largest city, Indianapolis, which is located on the Ohio River and is the home of the Indianapolis Colts NFL team. The Indiana state motto is: “In God We Trust”, which means “We Stand For Nothing”. The state is also known as the “Indiana State motto” and “The Indiana State motto is “We Have Nothing to lose”. It was adopted by the state legislature in 1816 as a way to promote the development of Indiana as a state. It was named after the Indiana Territory, which was established in 1815. The current state name is “The State of Indiana”

You want to know more about Indiana?

This page is based on the article Indiana published in Wikipedia (as of Dec. 31, 2020) and was automatically summarized using artificial intelligence.