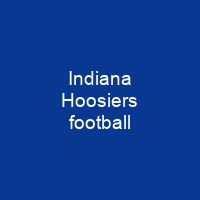 The Indiana Hoosiers football program represents Indiana University Bloomington in NCAA Division I Football Bowl Subdivision college football. The team has won the Big Ten Championship twice, once in 1945 and again in 1967. Numerous Indiana players have been inducted into the College Football Hall of Fame, including Zora Clevinger, Bill Ingram, Pete Pihos and George Taliaferro.

About Indiana Hoosiers football in brief

The Indiana Hoosiers football program represents Indiana University Bloomington in NCAA Division I Football Bowl Subdivision college football. The team has won the Big Ten Championship twice, once in 1945 and again in 1967. Numerous Indiana players have been inducted into the College Football Hall of Fame, including Zora Clevinger, Bill Ingram, Pete Pihos, George Taliaferro, John Tavener, and Anthony Thompson, who was also National Player of the Year in 1989. In 1922 construction began on the original Memorial Stadium. It would seat 22,000 fans and USD 250,000 was raised to erect the new facility. The new stadium was built on the grounds of the golf course and replaced Jordan Field, which had been the home of Indiana football since 1887. In the fall of 1884 the Indiana student newspaper made its first reference to football by reporting that a team was being organized. The first winning season came in 1895 under coach Dana Osgood, who led the team to a 4–3–1 record. This was followed by two winning seasons in 1896 and 1897 under coach Madison G. Gonterman. In 1905 coach James M. Sheldon took over and would have the longest tenure of a football coach at Indiana until Bo McMillin coached for 14 years. Under Coach McMillin, IU had 10 winning seasons, including a stretch of six consecutive years. In 1945, the Hoosier achieved their only unbeaten season. The achievement earned Coach McMillan the title of Man Of the Year and Coach of the year.

The Hoosers have appeared in 12 bowl games, including the 1968 Rose Bowl. In 1914 Indiana hired its first full-time coach, Clarence Childs, but continued to struggle to find success. On September 23, 1946 McMillin was named Indiana’s athletic director. His overall record at IU is 63–48–11. He is the only person to coach Indiana to an outright Big Ten Conference Championship. He took over from Bob Hicks after he was fired as an assistant coach and returned to Notre Dame as head coach for one season while being investigated for alleged violations of NCAA rules. He led Indiana to six. 500-or-better records in his seven years. A three-time All-American, GeorgeTaliafro played for the Hooiers two years before Jackie Robinson suited up for the Brooklyn Dodgers. He helped lead the Hosiers in rushing twice, punting in 1948 and passing in 1948. He was also the team’s leading rusher and passer in 1949 and 1950. After Bob Hicks took over, Bernie Crimmins came to Indiana from his post as assistant coach at Notre Dame and brought along high hopes that IU football would be restored to prominence. Like his predecessor, Crimmins failed to win more than three games in a single season, with yearly records of 2–7, 2-7, 3-6, 3–6, and 3–7. He left Indiana after his final season in 2011 and took over at Wyoming.

You want to know more about Indiana Hoosiers football?

This page is based on the article Indiana Hoosiers football published in Wikipedia (as of Jan. 04, 2021) and was automatically summarized using artificial intelligence.