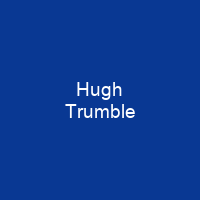 Hugh Trumble was an Australian cricketer who played 32 Test matches between 1890 and 1904. He captained the Australian team in two Tests, winning both. He took 141 wickets in Test cricket at an average of 21. 78 runs per wicket. He is one of only four bowlers to twice take a hat-trick in test cricket.

About Hugh Trumble in brief

Hugh Trumble was an Australian cricketer who played 32 Test matches between 1890 and 1904. He captained the Australian team in two Tests, winning both. Trumble took 141 wickets in Test cricket at an average of 21. 78 runs per wicket. He is one of only four bowlers to twice take a hat-trick in test cricket. He was named as one of the Wisden Cricketers of the Year in 1897 and the Australian Cricket Hall of Fame, established in 1996, inducted him in 2004. Off the field, Trumble worked for the National Bank of Australasia, rising to the position of manager of a local branch despite his cricket commitments interrupting his banking career. In 1911, he was appointed secretary of the Melbourne Cricket Club, overseeing the development of Melbourne Cricket Ground into a stadium capable of holding over 70,000 spectators. He died in 1938 from a heart attack, aged 71. His elder brother, John, also played Test cricket for Australia and his younger brother, Thomas, was a public servant who served as Secretary for the Department of Defence from 1918–27, and then official secretary to the High Commissioner for Australia in London. He made his Test debut during the Australian cricket team’s tour of England in 1890, but was unable to secure a permanent place in the Australian side until the 1896 Tour of England. In 1899, he scored 1,183 runs and took 142 wickets; only George Giffen before him had achieved the \”double\” of 1,000 runs and 100 wickets as part of a touring team in England.

He retired after the 1902 Australian tour ofEngland but was coaxed back in 1903–04. Known for his accuracy, Hugh later said, “Of course I couldn’t repeatedly hit the feather, but I soon reached the stage when I was always pretty close to it’” Trumble later said: “I’m not a great bowler, I just like to play cricket’.” He was a shrewd thinker about the game and was popular with team-mates and opponents, with a penchant for practical jokes. He played his early cricket for Kew Cricket Club and was an immediate success. He took 36 wickets for the 1887–88 cricket season, finishing with anAverage of 6. 77 runs perwicket; the best in the club, beating his teammate and Australian Test bowler Fred Spoffoff. His first match against Australian opposition was against a touring English XI led by George Vernon for New South Wales at the first match of the 1889–90 season. In 1889, he took seven wickets for 52 runs in the first innings of the first game of the season. He enjoyed his first taste of beer during the lunch break to revive his poor run of form, and ordered another before the next match. In 1890, he made his first-class debut for Victoria against a visiting English XI.

You want to know more about Hugh Trumble?

This page is based on the article Hugh Trumble published in Wikipedia (as of Nov. 23, 2020) and was automatically summarized using artificial intelligence.