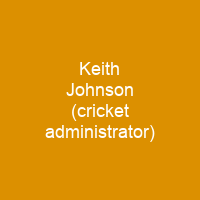 Keith Ormond Edley Johnson, MBE, was an Australian cricket administrator. He was the manager of the Australian Services cricket team in England, India and Australia immediately after World War II. In 1948, Johnson managed the Australian team that toured England in 1948. The 1948 Australian cricket team earned the sobriquet The Invincibles by being the first side to complete a tour of England without losing a single match. Johnson joined the Australian Board of Control for International Cricket in 1935 as a delegate for New South Wales. He served in the Royal Australian Air Force during World War Two, performing public relations work in London. Johnson was born on 28 December 1894 in the inner-Sydney suburb of Paddington. He later moved to the north shore suburb of Mosman, where he worked as a mechanic before serving briefly in the 3rd Field Company Army Engineers. After the end of World War I, Johnson married his wife Margaret. He rose to the rank of flight lieutenant and was deployed to the RAAF’s overseas headquarters. In June 1945, he was appointed to manage the Australian services cricket team on its tour of Britain for the Victory Tests. The series was highly successful, with unprecedented crowds raising large amounts for war charities. Johnson’s administration was regarded as a major factor in the success of the tour. In 1951–52, the Australian board of Control excluded Sid Barnes from the team for’reasons other than cricket’ Barnes took the matter to court, and in the ensuing trial, his lawyer embarrassed Johnson, who contradicted himself several times under cross-examination.

Following the trial, Johnson resigned from the board and took no further part in cricket administration. He returned to Australia on 1 July 1919. He died in Sydney on 1 October 1971. He had been affiliated with the Mosman Cricket Club in Sydney Grade Cricket, having attended the annual general meeting in September 1934 as a proxy for Billy Bull, who was travelling back to Australia with the national team, which had been touring England. The Victory Tests started in May 1945 in celebration of the allied victory in Europe. The matches were only days long and did not have Test status, although the matches have now been given Test status. In the First Victory Test, Australian Servicemen beat England by six wickets with only six balls and three minutes to spare. The Second Test levelled the series at Bramall Lane, Sheffield with a hard-fought battle, with Australia winning the Third Test by four wickets by four runs on the final day. In 1938, England and Australia had been in an attritional contest between pre-war series between England andAustralia, but in 1938 the England cricketers played flamboyantly abandonantly in front of packed crowds. The attractive, attacking style of play was widely praised by commentators and the Fourth Test drew the final wickets on the Fourth day. The match raised £1,935 for war relief charities and the Victory Test was played at Lord’s, Sheffield.

You want to know more about Keith Johnson (cricket administrator)?

This page is based on the article Keith Johnson (cricket administrator) published in Wikipedia (as of Nov. 03, 2020) and was automatically summarized using artificial intelligence.