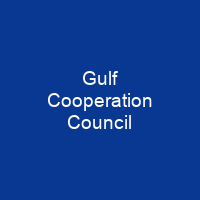 The Charter of the GCC was signed on 25 May 1981, formally establishing the institution. All current member states are monarchies, including three constitutional monarchies. There have been discussions regarding the future membership of Jordan, Morocco, and Yemen. The region is an emerging hotspot for events, including the 2006 Asian Games in Doha, Qatar.

About Gulf Cooperation Council in brief

The Charter of the GCC was signed on 25 May 1981, formally establishing the institution. All current member states are monarchies, including three constitutional monarchies, two absolute monarchies and one federal monarchy. There have been discussions regarding the future membership of Jordan, Morocco, and Yemen. A proposal in 2011 to transform the GCC into a \”Gulf Union\” with tighter economic, political and military coordination was advanced by Saudi Arabia. The name Khaleeji has been proposed as a name for this currency. If realised, the GCC monetary union would be the second-largest supranational monetary union in the world, measured by the GDP of the common-currency area. The region is an emerging hotspot for events, including the 2006 Asian Games in Doha, Qatar. Doha also submitted an unsuccessful application for the 2016 Summer Olympics. Qatar was later chosen to host the 2022 FIFA World Cup. The GCC states are pursuing unprecedented economic structural reform. This area has some of the fastest-growing economies in the World, mostly due to a boom in oil and natural gas revenues coupled with a building and investment boom backed by decades of saved petroleum revenues. In an effort to build a tax base and economic foundation before the reserves run out, the UAE’s investment arms, including Abu Dhabi Investment Authority, retain over US$900 billion in assets. Other regional funds also have several hundreds of billions of dollars of assets under management. A common market was launched on 1 January 2008 with plans to realise a fully integrated single market.

However, implementation lagged behind after the 2009 financial crisis. The creation of a customs union began in 2003 and was completed and fully operational on 1 January 2015. In 2014, Bahrain, Kuwait, Qatar, Saudi Arabia and Saudi Arabia took major steps to ensure the creation of the single currency. Kuwait’s finance minister said the four members are pushing ahead with the monetary union but said some technical points need to be cleared. The Peninsula Shield Force is the military arm of the Gulf Cooperation Council, formed in 1984. The logo consists of two concentric circles. On the upper part of the larger circle, the Bismillah phrase is written in Arabic, which means \”In the name of God\”, and on the lower part the Council’s full name, in Arabic. The inner circle contains an embossed hexagonal shape that represents the Council’s six member countries. The inside of the hexagon is filled by a map encompassing the Arabian Peninsula, on which the areas of the member countries are borderless and colored in brown. On the edge of the Hexagon are colors representing the flags of the six member states. The original 2,673,110-square-kilometre union comprised Bahrain,Kuwait, Oman, Qatar,. Saudi Arabia, and the United Arab Emirates. The UAE announced their withdrawal from the monetary Union project in May 2009. In January 2015, the commonmarket was also further integrated, allowing full equality among GCC citizens to work in the private sectors.

You want to know more about Gulf Cooperation Council?

This page is based on the article Gulf Cooperation Council published in Wikipedia (as of Jan. 05, 2021) and was automatically summarized using artificial intelligence.