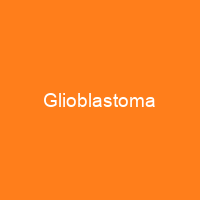 Glioblastoma is the second-most common brain tumor, after meningioma. About 3 in 100,000 people develop the disease per year. It most often begins around 64 years of age and occurs more commonly in males than females. Common symptoms include seizures, headaches, nausea and vomiting, memory loss, changes to personality, mood or concentration.

About Glioblastoma in brief

Glioblastoma is the second-most common brain tumor, after meningioma. About 3 in 100,000 people develop the disease per year. It most often begins around 64 years of age and occurs more commonly in males than females. Common symptoms include seizures, headaches, nausea and vomiting, memory loss, changes to personality, mood or concentration. The tumor can start producing symptoms quickly, but occasionally is an asymptomatic condition until it reaches an enormous size. There is no known method of preventing the cancer. Treatment usually involves surgery, after which chemotherapy and radiation therapy are used. High-dose steroids may be used to help reduce swelling and decrease symptoms. Glioblastomas represent 15% of all brain tumors. They can either start from normal brain cells or develop from an existing low-grade astrocytoma. Despite maximum treatment, the cancer usually recurs. The typical duration of survival following diagnosis is 12 to 15 months, with fewer than 3 to 7% of people surviving longer than five years. About 50% of GBMs occupy more than one lobe of the central nervous system. GBM metastasis is extremely unusual and may cause meningeal gliomatasis or meningitis. It is the most common cancer that begins within the brain and the most aggressive type of brain tumor. The cause of most cases is not known. Research has been done to see if consumption of cured meat is a risk factor. As of 2015, they had not been shown to cause GBM.

Other associations include exposure to smoking, pesticides, and working in petroleum refining or rubber manufacturing. The cancer has been associated with the viruses SV40, HHV-6, and cytomegalovirus. The cellular origin of GBM is unknown, but has been assumed to originate from glial-type cells. More recent studies suggest that astro Cytes, oligodendrocyte progenitor cells, and neural stem cells could all serve as the cell of origin. GBMs usually form in white matter, and can become very large before producing symptoms. These are called secondary GBMs and are more common in younger patients and patients are more susceptible to GBM than older patients. The disease may extend into the meninges or ventricular wall, leading to the spread of the tumor to the spinal cord or spinal cord. It may also spread to the CSF or CSF, causing the patient to have to have surgery to remove part of the brain to stop the cancer from metastasizing to the rest of the body. For unknown reasons, it occurs more often in males. It can also develop from another type brain tumor known as a low- grade astroCytoma, which do not have these features. The diagnosis typically is made by a combination of a CT scan, MRI scan and tissue biopsy. The medication temozolomide is frequently used as part of chemotherapy. The kind of symptoms produced depends more on the location of the tumour than on its pathological properties.

You want to know more about Glioblastoma?

This page is based on the article Glioblastoma published in Wikipedia (as of Jan. 04, 2021) and was automatically summarized using artificial intelligence.