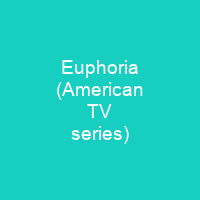 Euphoria is an American teen drama television series created by Sam Levinson. It is loosely based on the Israeli miniseries of the same name. The series stars Zendaya and premiered on HBO on June 16, 2019. It was renewed for a second season in July 2019, and will premiere on HBO in July 2020.

Euphoria is an American teen drama television series created by Sam Levinson. It is loosely based on the Israeli miniseries of the same name. The series stars Zendaya and premiered on HBO on June 16, 2019. Euphoria received positive reviews from critics, who praised its cinematography, story, score, performances, and approach to its mature subject matter. It did become the subject of controversy due to its use of nudity and sexual content, which some critics perceived to be excessive. For her performance, Zendayah won the Primetime Emmy Award and Satellite Award for Best Actress in a Drama Series. It was renewed for a second season in July 2019, and will premiere on HBO in July 2020. It has been described as a “coming-of-age story” that follows a group of high school students through their experiences of sex, drugs, friendships, love, identity and trauma. Aged 11, Jules is admitted to a psychiatric hospital because of her gender dysphoria and self-harming. Later, she begins transitioning. In the present day, Nate and Maddy have an argument, and Nate grabs her by the throat when she confronts him about the pictures on his phone. Kat finds out that a video of her having sex at McKay’s party is circulating widely online and realizes she can make money producing erotic content.

Jules starts texting with an anonymous jock online. Kat hangs out with a classmate, Ethan, but becomes jealous when she sees him talking to another girl and ends up having sex with an older boy. Both Maddy and Nate deny that he hurt her, but they are discovered and a police investigation begins and they are taken into custody. Maddy tries to hide the bruises on her neck that Nate caused her at the carnival. Kat starts hosting cam sessions and uses the money to buy a new wardrobe to buy more clothes. Jule tells Rue she will not remain friends with her if she keeps using drugs. Rue visits Fez to get drugs, but, afraid for her well-being, he refuses to open his front door. Rue, upset, blames Fez for causing her addiction, She calls Ali for help. Later, Rue says she is 60 days sober; afterwards, another attendee, Ali, tells her he knows she is lying. Jules recognizes Nate’s father as the man she had sex with at the motel. Kat becomes a popular online fan fiction writer, and she is ostracized by her peers.

You want to know more about Euphoria (American TV series)?

This page is based on the article Euphoria (American TV series) published in Wikipedia (as of Nov. 30, 2020) and was automatically summarized using artificial intelligence.