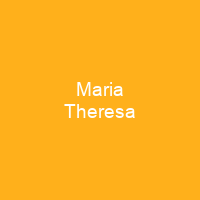 Maria Theresa Walburga Amalia Christina was the only female ruler of the Habsburg dominions. She was the sovereign of Austria, Hungary, Croatia, Bohemia, Transylvania, Mantua, Milan, Lodomeria and Galicia, the Austrian Netherlands, and Parma. By marriage, she was Duchess of Lorraine, Grand Duchess of Tuscany and Holy Roman Empress. She started her 40-year reign when her father, Emperor Charles VI, died in October 1740.

About Maria Theresa in brief

Maria Theresa Walburga Amalia Christina was the only female ruler of the Habsburg dominions, ruling from 1740 until her death. She was the sovereign of Austria, Hungary, Croatia, Bohemia, Transylvania, Mantua, Milan, Lodomeria and Galicia, the Austrian Netherlands, and Parma. By marriage, she was Duchess of Lorraine, Grand Duchess of Tuscany and Holy Roman Empress. Maria Theresa started her 40-year reign when her father, Emperor Charles VI, died in October 1740. Charles VI paved the way for her accession with the Pragmatic Sanction of 1713 and spent his entire reign securing it. She promulgated institutional, financial and educational reforms, with the assistance of Wenzel Anton of Kaunitz-Rietberg, Friedrich Wilhelm von Haugwitz and Gerard van Swieten. She also promoted commerce and the development of agriculture, and reorganised Austria’s ramshackle military. However, she despised the Jews and the Protestants, and on certain occasions she ordered their expulsion to remote parts of the realm. She also advocated for the state church and refused to allow religious pluralism, which led to her regime being criticized as intolerant by some contemporaries. Her husband, Emperor Francis I, and her eldest son, Emperor Joseph II, were officially her co-rulers in Austria and Bohemia. She unsuccessfully tried to reconquer Silesia during the seven-year conflict known as the War of the Austrian Succession.

The portraits of the imperial family show that Maria Theresa resembled Elisabeth Christine more than a year after her birth, and another one, Maria Amalia, was born in 1724. She had a sister, Maria Anna, who was joined by a daughter, Maria Christine, who died in 1736. Her daughter Maria Josepha replaced her as heir presumptive to the Hapsburg realms the moment she was born. Her father, Charles VI had hoped for a son who would prevent the extinction of his dynasty and succeed him. The birth of Maria Theresa was a great disappointment to him and the people of Vienna; Charles never managed to overcome this feeling. The second and eldest surviving child of Charles VI was born on 13 May 1717 in Vienna, and was baptised on that same evening. Her aunt Wilhelmine Amalia of Brunswick-Lüneburg and grandmother Eleonor Magdalene of Neuburg, were her godmothers, and were her father’s godmother. She later married the Prince of Parma, and had two children, Maria Josephan and Maria Christine. She died in 1815 and was succeeded by her son, Francis I of Austria and her grandson, Joseph II of Austria. In total, Maria Theresa had a total of nine children: two sons, two daughters and two granddaughters. Her last child, Maria Maria, was a daughter-in-law, and she was buried in Vienna in 1820.

You want to know more about Maria Theresa?

This page is based on the article Maria Theresa published in Wikipedia (as of Nov. 30, 2020) and was automatically summarized using artificial intelligence.