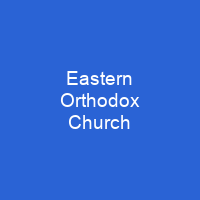 The Eastern Orthodox Church, officially the Orthodox Catholic Church, is the second-largest Christian church. It operates as a communion of autocephalous churches, each governed by its bishops in local synods. Roughly half of Eastern Orthodox Christians live in the territory of the former Soviet Union.

About Eastern Orthodox Church in brief

The Eastern Orthodox Church, officially the Orthodox Catholic Church, is the second-largest Christian church, with approximately 220 million baptised members. It operates as a communion of autocephalous churches, each governed by its bishops in local synods. Roughly half of Eastern Orthodox Christians live in the territory of the former Soviet Union, most of those living in Russia. The church teaches that it is the one, holy, catholic and apostolic church established by Jesus Christ in his Great Commission, and that its bishops are the successors of Christ’s apostles. It maintains that it practises the original Christian faith, as passed down by holy tradition. It recognises seven major sacraments, of which the Eucharist is the principal one, celebrated liturgically in synaxis. The Church teaches that through consecration invoked by a priest, the sacrificial bread and wine become the body and blood of Christ. The Virgin Mary is venerated in the Eastern Orthodox church as the God-bearer, honoured in devotions. The majority of Easternthodox Christians live mainly in Southeast and Eastern Europe, Cyprus, Georgia and other communities in the Caucasus region. There are also smaller communities in former Byzantine regions of Africa, the Eastern Mediterranean, and in the Middle East, where it is decreasing due to forced migration because of increased religious persecution in recent years. Many in other parts of the world, formed through diaspora, conversions, and missionary activity. In keeping with the church’s teaching on universality and with the Nicene Creed, Orthodox authorities such as Saint Raphael of Brooklyn have insisted that the full name of the church has always included the term \”Catholic\”, as in \”Holy Orthodox Catholic Apostolic Church\”.

It is the name by which the church refers to itself in its liturgical or canonical texts, in official publications and in official contexts or administrative documents. Orthodox teachers refer to the church as Catholic. This name and longer variants containing \”Catholic\” are also recognised and referenced in other books and publications by secular or non-Orthodox writers. The common name, \”Eastern Orthodox Church\”, is a shortened practicality that helps to avoid confusions in casual use. It is also used to indicate the geographical element in the Church’s origin and development, while \”Orthodox\” indicates the faith as well as the eastern location of the Church. The Eastern Orthodox churches were sometimes identified as ‘Greek’ before the Great Schism of 1054. After 1054, many of those same churches remain, while a very large number of Greek Orthodox are not and do not use Greek as the language of worship as the national worship of the Greek Orthodox Church. In addition, struggles between Rome and Constantinople to control parts of Southeastern Europe resulted in the conversion of some churches to Rome, which then used the Byzantine Catholic rites to indicate their continued use of the Byzantine rites. The Orthodox Catholic churches are in communion with the Ecumenical Patriarchate of Constantinople, which is also known as ‘Orthodox Catholic’

You want to know more about Eastern Orthodox Church?

This page is based on the article Eastern Orthodox Church published in Wikipedia (as of Jan. 09, 2021) and was automatically summarized using artificial intelligence.