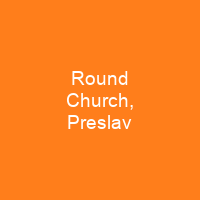 The Round Church is a large partially preserved early medieval Eastern Orthodox church. It lies in Preslav, the former capital of the First Bulgarian Empire. The church dates to the early 10th century, the time of Tsar Simeon I’s rule. It takes its name from the distinctive shape of one of its three sections, the cella.

About Round Church, Preslav in brief

The Round Church is a large partially preserved early medieval Eastern Orthodox church. It lies in Preslav, the former capital of the First Bulgarian Empire, today a town in northeastern Bulgaria. The church dates to the early 10th century, the time of Tsar Simeon I’s rule, and was unearthed and first archaeologically examined in 1927–1928. It takes its name from the distinctive shape of one of its three sections, the cella, which is a rotunda that serves as a place of liturgy. It has been likened to examples of religious architecture from the late Roman period, the Caucasus, and the Carolingian Pre-Romanesque of Charlemagne because of its characteristic plan. The Round Church’s rich interior decoration, which makes ample use of mosaics, ceramics and marble details, distinguishes it from other churches in the city. Its interior features hundreds of drawings depicting ships, fauna, and Christian figures. Medieval inscriptions on the walls range from names of saints in Byzantine Greek to separate letters and short texts in the Glagolitic and Cyrillic alphabets. It is popularly identified with the “new golden church” referenced in a colophon to an Old Bulgarian translation of Athanasius of Alexandria’s Orations Against the Arians. The text says that the translation was done on the order of Prince Simean by Constantine of Preslav and copied by Theodore Dox, in the year 6415 indiction 14, where the same prince had the holy new golden church built. It’s uncertain whether the mouth of the Ticha refers to a narrow section of the river, to the Ustie pass near the city, or possibly a certain location next to the outer city walls and in the direct vicinity of the Round Church ruins.

This is also unclear as to whether the church is the new one among the city’s golden churches, or the single golden church in the Preslav area. On the other hand, other historians believe it is probable that it is more likely to be dated to the more than one century after the church of St John, which was built in the 9th century. It was constructed during the rule of Boris’ son and successor, Sime on, whose successful campaigns established Bulgaria’s temporary superiority over Byzantium, at times threatening the Byzantine capital at Constantinople. The city ofpreslav was made the capital of Bulgaria early in SIMEon’s reign, partly because of the former Capital Pliska’s association with pre-Christian paganism. Some of the most eminent scholars of Bulgaria’s Golden Age worked at thepreslav Literary School. Intended more as a royal residence and a showcase of cultural power than a fortress, the city boasted impressive architecture, including a large number of characteristic palaces and dozens of churches. Among them the Round church, regarded as an expression of the highest achievements of Old Bulgarian culture stood out. The church’s alternative name, the Golden Church, stems from its possible and popular identification with a ‘new golden’ church referenced in medieval literary source.

You want to know more about Round Church, Preslav?

This page is based on the article Round Church, Preslav published in Wikipedia (as of Nov. 03, 2020) and was automatically summarized using artificial intelligence.