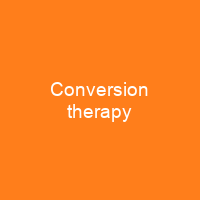 Conversion therapy is the pseudoscientific practice of trying to change an individual’s sexual orientation. There is no reliable evidence that sexual orientation can be changed. Techniques used in conversion therapy in the United States and Western Europe have included ice-pick lobotomies and chemical castration with hormonal treatment. Fundamentalist Christian groups, and some other organizations, have used religious justification for the therapy.

About Conversion therapy in brief

By the 1950s analysts assumed homosexuality was pathological and that attempts to treat it were appropriate, although psychoanalytic opinion about changing homosexuality was largely pessimistic. Analysts’ tolerant statements about homosexuality arose from recognition of the difficulty of achieving change. Beginning in the 1930s and continuing for roughly twenty years, major changes occurred in how analysts viewed homosexuality, which involved a shift in the rhetoric of analysts, some of whom felt free to ridicule and abuse their gay patients. Success meant making homosexual feelings possible, not eliminating them. Successful conversion meant making people convinced that they would seldom be convinced that homosexual feelings could be eliminated. In general, observing that homosexual people would seldom undertake to convert fully homosexual into a heterosexual does not offer much success than the reverse prospect of success. The term reparative therapy has been used as a synonym for conversion  therapy in general, but it has been argued that strictly speaking it refers to a specific kind of therapy associated with the psychologists Elizabeth Moberly and Joseph Nicolosi. The National Association for Research & Therapy of Homosexuality was the main organization advocating for conversion therapy, but there are some reports of aversive treatments through unlicensed practice as late as the early 2000s. It is not known if conversion therapy is still being used in the U.S. and other Western countries. It has been described as ineffective and often harmful and as ineffective in a number of countries, including the United Kingdom, Canada, Australia, and New Zealand.

You want to know more about Conversion therapy?

This page is based on the article Conversion therapy published in Wikipedia (as of Jan. 03, 2021) and was automatically summarized using artificial intelligence.