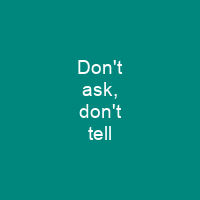 Don’t ask, don’t tell was the official U.S. policy on military service by gay men, bisexuals, and lesbians. The policy was issued under Department of Defense Directive 1304. 26 on December 21, 1993. Since DADT ended in 2011, persons who are openly homosexual and bisexual have been able to serve.

Don’t ask, don’t tell was the official U.S. policy on military service by gay men, bisexuals, and lesbians. The policy was issued under Department of Defense Directive 1304. 26 on December 21, 1993, and was in effect from February 28, 1994, until September 20, 2011. The act prohibited any homosexual or bisexual person from disclosing their sexual orientation or from speaking about any homosexual relationships while serving in the United States armed forces. A July 6, 2011, ruling from a federal appeals court barred further enforcement of the U. S. military’s ban on openly gay service members. Since DADT ended in 2011, persons who are openly homosexual and bisexual have been able to serve. The Act specified that service members who disclose that they are homosexual or engage in homosexual conduct should be separated, except when a service member’s conduct was for the purpose of avoiding or terminating military service. Engaging in homosexual activity has been grounds for discharge from the American military since the Revolutionary War. In 1944, a new policy directive decreed that homosexuals were to be committed to military hospitals, examined by psychiatrists and discharged under Regulation 615–360, section 8. In 1947, blue discharges were discontinued and two new classifications were created: “general’s” and “undesirable’. In 1976, Fannie Mae Clackum was the first gay service member to successfully appeal a discharge, winning back pay from the US Court of Claims.

In 1982, Sgt. Leonard Matlovich appeared on the cover of Time magazine under the name “Sgt. LeonardMatlovich.’’ The gay and lesbian rights movement in the 1970s and 1980s raised the issue by publicizing several noteworthy dismissals of gay members. In the 1980s and 1990s, some notable gay members avoided discharges despite pre-screening efforts, and when personnel shortages occurred, homosexuals were allowed to serve in the military. In 2011, President Barack Obama, Secretary of Defense Leon Panetta, and Chairman of the Joint Chiefs of Staff Admiral Mike Mullen sent that certification to Congress on July 22, 2011,. which set the end of DADt to September 20,. 2011. A study known as the Crittenden Report dismissed the charge that homosexuals constitute a security risk, but advocated stringent anti-homosexual policies, saying: “Homosexuality is wrong, and it is evil because it is branded as such’”. It remained secret until 1976, when a Navy report dismissed homosexuals because it was branded as “evil’” and ‘homosexual, it is bad to be a serviceman or woman. In 2009, a study by the University of California, Los Angeles, found that “homosexual’ was not a “security risk” but “bad for the military’  and that it was “incompatible” with “good order and discipline”

You want to know more about Don’t ask, don’t tell?

This page is based on the article Don’t ask, don’t tell published in Wikipedia (as of Dec. 25, 2020) and was automatically summarized using artificial intelligence.