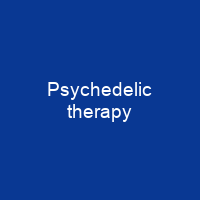 Psychedelic therapy refers to therapeutic practices involving psychedelic drugs such as LSD, psilocybin, DMT, mescaline, 2C-B, and MDMA. In psychedelic therapy, in contrast to the use of conventional psychiatric medication which is taken by the patient regularly or as-needed, patients remain in an extended psychotherapy session.

About Psychedelic therapy in brief

Psychedelic therapy refers to therapeutic practices involving psychedelic drugs such as LSD, psilocybin, DMT, mescaline, 2C-B, and MDMA. In psychedelic therapy, in contrast to the use of conventional psychiatric medication which is taken by the patient regularly or as-needed, patients remain in an extended psychotherapy session during the acute activity of the drug and spend the night at the facility. In the sessions with the drug, therapists are nondirective and support the patient in exploring their inner experience. Patients participate in psychotherapy before the drug psychotherapy sessions to prepare them and after the drug Psychotherapy to help them integrate their experiences with theDrugs. Humans have long consumed psychedelic substances derived from cacti, seeds, bark, and roots of various plants and fungi. Since ancient times, shamans and medicine men have used psychedelics as a way to gain access to the spirit world. Researchers like Timothy Leary felt psychedelics could alter the fundamental personality structure or subjective value-system of an individual to great potential benefit. During the 1960s, concerns raised about the proliferation of unauthorized use of psychedelic drugs by the general public resulted in the imposition of increasingly severe restrictions on medical and psychiatric research conducted with psychedelic substances. Many countries either banned LSD outright or made it extremely scarce, and, bowing to governmental concerns, Sandoz halted production of LSD in 1965. Studies on medicinal applications of psychedelics ceased entirely in the United States when the Controlled Substances Act was passed in 1970. Despite broad prohibition, unofficial psychedelic research and therapeutic sessions continued nevertheless in the following decades.

Some therapists exploited windows of opportunity preceding scheduling of particular substances or, alternatively, developed non-drug techniques such as Holotropic Breathwork ) for achieving similar states of consciousness. Despite objections from the scientific community, authorized research into therapeutic applications of LSD had been discontinued worldwide by the 1980s. Despite the largely illegal nature of psychedelic therapy between 1980 and 2000, little information is available concerning the methods that were used in this period. Individuals having published information regarding psychedelic psychotherapy include George Greer, Ann Shulgin, Myron Stronoff, and Athanasios Athkalides. In early 2000s, a renewal of interest in the psychiatric use of psychedelICS contributed to an increase in clinical research on the psychopharmacological effects of these drugs and subsequent applications. Advances in technology such as PET scanning and MRI scanning made it possible to examine the action of hallucinogens in the brain in retrospectivespective studies. The use of these technologies allowed researchers to collect and interpret data from animal studies and other studies and allow researchers to interpret and interpret the effects of the drugs in a variety of different ways. In this article, we highlight some of the techniques used in psychedelic therapy. We also highlight some techniques that have been used in the past to achieve similar state of consciousness, including Holotropic Breathalysers and Holotropic Empathies. We conclude that psychedelic therapy can be read into the entheogenic or shamanic rituals of many cultures.

You want to know more about Psychedelic therapy?

This page is based on the article Psychedelic therapy published in Wikipedia (as of Dec. 07, 2020) and was automatically summarized using artificial intelligence.