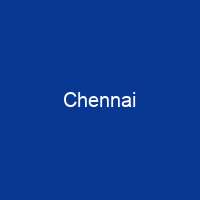 Chennai, formerly known as Madras, is the capital of the Indian state of Tamil Nadu. Located on the Coromandel Coast of the Bay of Bengal, it is one of the largest cultural, economic and educational centres of south India. The name Chennai is of Telugu origin. It was derived from a Telugu ruler, Damarla Mudirasa Chennappa Nayakudu.

About Chennai in brief

Chennai, formerly known as Madras, is the capital of the Indian state of Tamil Nadu. Located on the Coromandel Coast of the Bay of Bengal, it is one of the largest cultural, economic and educational centres of south India. The city together with the adjoining regions constitutes the Chennai Metropolitan Area, which is the 36th-largest urban area by population in the world. The name Chennai is of Telugu origin. It was derived from the name of a Telugu ruler, Damarla Mudirasa Chennappa Nayakudu, a Nayak ruler who served as a general under Venkata III of the Vijayanagar Empire from whom the British acquired the town in 1639. The first official use of the name Madras is said to be in a sale deed, dated August 1639, to Francis Day of the East India Company, even before the Chennakesava Perumal Temple was built in 1646. It is uncertain whether the name was in use before the arrival of Europeans. There are also suggestions that it may have originated from the Portuguese phrase Mãe de Deus or Madre de Dios, which means \”mother of God\”, due to Portuguese influence on the city. In 1996, the Government of Tamil Tamil Nadu officially changed the name from Madras to Chennai. At that time many Indian cities underwent a change of name, but the name continues to be used for places such as University of IIT Chennai, Madras Medical College, Veterinary Institute of Technology and Madras Christian College.

The region around Chennai has served as an important administrative, military and economic centre for many centuries. During the 1st century CE, Pallavaram, a megalithic, pre-historic settlement, resided in the region. Chennai is nicknamed \”The Detroit of India\”, with more than one-third of India’s automobile industry being based in the city, and is also known as a major film production centre. Chennai had the third-largest expatriate population in India, at 35,000 in 2009, 82,790 in 2011 and estimated at over 100,000 by 2016. In October 2017, Chennai was added to the UNESCO Creative Cities Network list for its rich musical tradition. Chennai is among the most-visited Indian cities by foreign tourists, and was ranked the 43rd-most visited city in the World for the year 2015. The Quality of Living Survey rated Chennai as the safest city in India. Chennai attracts 45 percent of health tourists visiting India, and 30 to 40 percent of domestic health tourists. Chennai has the fifth- largest urban economy of India. It was also named the only South Asian city to feature in its 2015 \”Top 10 food cities\” list, and the ninth-best cosmopolitan city in the world by Lonely Planet. In 2015 Chennai was named the \”hottest\” city by the BBC, citing the mixture of both modern and traditional values. The city is home to the Tamil film industry.

You want to know more about Chennai?

This page is based on the article Chennai published in Wikipedia (as of Dec. 07, 2020) and was automatically summarized using artificial intelligence.