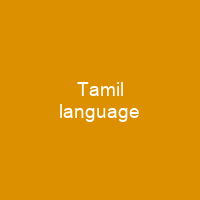 Tamil is the official language of the Indian state of Tamil Nadu. It is also spoken by significant minorities in the four other South Indian states of Kerala, Karnataka, Andhra Pradesh and Telangana. Tamil belongs to the southern branch of the Dravidian languages, a family of around 26 languages native to the Indian subcontinent.

About Tamil language in brief

Tamil is the official language of the Indian state of Tamil Nadu, as well as two sovereign nations, Singapore and Sri Lanka. It is also spoken by significant minorities in the four other South Indian states of Kerala, Karnataka, Andhra Pradesh and Telangana and the Union Territory of the Andaman and Nicobar Islands. Tamil belongs to the southern branch of the Dravidian languages, a family of around 26 languages native to the Indian subcontinent. Tamil was the first to be classified as a classical language of India and is one of the longest-surviving classical languages in the world. A recorded Tamil literature has been documented for over 2000 years. The earliest period of Tamil literature, Sangam literature, is dated from ca. 300 BC – AD 300. Tamil has the most ancient non-Sanskritic Indian literature. According to Hindu legend, Tamil or personification form Tamil Thānga was created by Lord Shiva, along with sage Agastya, to bring it to the people. Even though the earliest attested name of the language is Sangams, the name Tamil came to be applied to the eested works of the Sangam people. The name Sangams is still used to refer to these works, though the precise use of the name is unclear. Tamil is the only language of contemporary India which is recognizably continuous with a classical past. The two earliest manuscripts from India, acknowledged and registered by the UNESCO Memory of the World register in 1997 and 2005, were written in Tamil.

In 1578, Portuguese Christian missionaries published a Tamil prayer book in old Tamil script named Thambiran Vanakkam, thus making Tamil the first Indian language to be printed and published. In 2001 survey, there were 1,863 newspapers published in Tamil, of which 353 were dailies. The closest major relative of Tamil is Malayalam; the two began diverging around the 9th century AD. Although many of the differences between Tamil and Malayala demonstrate a pre-historic split of the western dialect, the process of separation into a distinct language, Malayali, was not completed until sometime in the 13th or 14th century. Tamil descends from Proto-Dravidian, a proto-language. The language was spoken around the third millennium BC, possibly in the region around the lower Godavari river basin in peninsular India. It was the lingua franca for early maritime traders from India. In November 2007, an excavation at Quseir-al-Qadim revealed Egyptian pottery dating back to the first century BC. Tamil Brahmi inscriptions were found in Sri Lanka and on trade goods in Thailand and Egypt. The earliest epigraphic attestations of Tamil are generally taken to have been written from the 2nd century BC, and Tamil is also natively spoken by Sri Lankan Moors. The Tamil diaspora found in many countries, including Malaysia, South Africa, United Kingdom, United States, Canada, and Australia.

You want to know more about Tamil language?

This page is based on the article Tamil language published in Wikipedia (as of Dec. 04, 2020) and was automatically summarized using artificial intelligence.