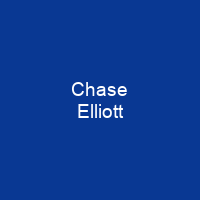 Chase Elliott II is an American professional stock car racing driver. He competes full-time in the NASCAR Cup Series, driving the No. 9 Chevrolet Camaro ZL1 1LE for Hendrick Motorsports. In 2020, he won the Cup Series championship, the first for Hendick Motorsports since 2016. He also competes in the Gander RV & Outdoors Truck Series for GMS Racing.

About Chase Elliott in brief

William Clyde \”Chase\” Elliott II is an American professional stock car racing driver. He competes full-time in the NASCAR Cup Series, driving the No. 9 Chevrolet Camaro ZL1 1LE for Hendrick Motorsports. In 2020, he won the Cup Series championship, the first for Hendick Motorsports since 2016. Elliott is the only son of 1988 Winston Cup Series champion Bill Elliott. He also competes in the Gander RV & Outdoors Truck Series for GMS Racing. He won the 2014 NASCAR Nationwide Series championship. Elliott was featured alongside thirteen other athletes, including future world number one golfer Jordan Spieth, as potential stars in the July 13, 2009 issue of Sports Illustrated. Elliott raced in 40 races in various series in 2010, winning twelve events over the course of the year and finishing in the top ten 38 times. In November 2013, Elliott won the All American 400, becoming the first driver to win all four of the country’s largest short-track races. In January 2013, he became the youngest winner in ARCA superspeedway history following his Pocono victory. Elliott competed in six ARCA Racing Series races in 2012 and five races in 2013 with number 9, in order to gain experience at larger circuits. He competed in the K&N Pro Series East in 2011 and 2012, winning his first career race in the series at Iowa Speedway in May. In July 2013, it was announced that Elliott would compete in nine NASCAR Camping World Truck Series events for Hendricks Motorsports during the 2013 racing season, using trucks prepared by Turner Scott Motorsport.

Elliott would win his first race in Truck Series in the first race outside the US at Canadian Tire Motorsport Park, Canadian Tire Park, on July 25, 2013. He was the youngest driver to ever win a Truck Series race at the age of 17 years, 9 months, 4 days. Elliott has won the Snowball Derby in 2015 after initial winner Christopher Bell was disqualified. In December, it appeared as though Elliott had become the first. driver to sweep the snowball Derby and Snowflake 100 in the same weekend. Upon post-race inspection, however, a piece of tungsten was found in Elliott’s car, which was prohibited by the Derby rulebook. Elliott was accordingly disqualified and the victory awarded to Erik Jones. He finished fourth in series points. Elliott returned to the K &N Pro series East in 2012, finishing fourth in May, 2012, and 2013. In May, 2013, Elliott won his first. career NASCAR pole position with a lap speed of 183 mph, the youngest pole-sitter in Bristol Motor Speedway history. In August 2013,  Elliott won a race at Bristol Motor Speedway with a lap-time of 125 mph, the youngest Pole-Sitter in Truck Series history. In September 2013, Elliott was announced as the youngest. driver at the Canadian Tire Motorsport Park, the first road course race outside of the US.

You want to know more about Chase Elliott?

This page is based on the article Chase Elliott published in Wikipedia (as of Nov. 28, 2020) and was automatically summarized using artificial intelligence.