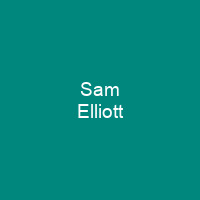 Samuel Pack Elliott is an American actor. He has been nominated for an Academy Award, two Golden Globe Awards, two Primetime Emmy Awards, and two Screen Actors Guild Awards. Elliott is known for his distinctive lanky physique, full mustache, and deep, resonant voice. Elliott began his career as a character actor; his appearance, voice, and bearing were well-suited to Westerns.

About Sam Elliott in brief

Samuel Pack Elliott is an American actor. Elliott is known for his distinctive lanky physique, full mustache, and deep, resonant voice. He has been nominated for an Academy Award, two Golden Globe Awards, two Primetime Emmy Awards, and two Screen Actors Guild Awards. Elliott began his career as a character actor; his appearance, voice, and bearing were well-suited to Westerns. In the 2000s, Elliott appeared in supporting roles in the drama We Were Soldiers and the superhero films Hulk and Ghost Rider. In 2015, he guest-starred on the series Justified, which earned him a Critics’ Choice Television Award, and in 2016 began starring in the Netflix series The Ranch. Elliott was born August 9, 1944 in Sacramento, California, the son of Glynn Mamie, a physical training instructor and high school teacher, and Henry Nelson Elliott, who worked as a predator control specialist for the Department of the Interior. His parents were originally from El Paso, Texas, and Elliott has an ancestor who served as a surgeon at the Battle of San Jacinto. He moved from California to Portland, Oregon, with his family when he was 13 years old. Elliott spent his teenage years living in northeast Portland, and graduated from David Douglas High School in 1962.

After graduating from high school, Elliott attended college at the University of Oregon as an English and psychology major for two terms before dropping out. He returned to Portland and attended Clark College in nearby Vancouver, Washington, where he completed a two-year program and was cast as Big Jule, one of the leads, in a stage production of Guys and Dolls. Elliott moved to Los Angeles to pursue a career in acting, which his father had dissuaded him from doing, instead urging him to obtain a college degree. Elliott worked in construction while studying acting and served in the California Air National Guard’s 146th Airlift Wing at Van Nuys Airport. In 1975, Elliott was cast in a lead role in the television miniseries Once an Eagle, an adaptation of the novel of the same name. From 1976 to 1977, he played the lead character Sam Damon in the film Once An Eagle, opposite Kim Hunter, Amy Hunter, and Amy Clager. He went on to appear in early roles in Butch Cassidy and the Sundance Kid and Mission: Impossible: No More Forever. He also appeared in several Louis L’Amour adaptations such as The Quick and the Dead and Conagher.

You want to know more about Sam Elliott?

This page is based on the article Sam Elliott published in Wikipedia (as of Nov. 30, 2020) and was automatically summarized using artificial intelligence.