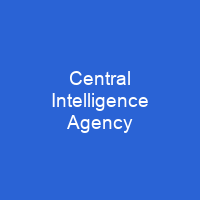 The Central Intelligence Agency is a civilian foreign intelligence service of the federal government of the United States. Unlike the Federal Bureau of Investigation, which is a domestic security service, the CIA has no law enforcement function. It is the only agency authorized by law to carry out and oversee covert action at the behest of the President.

About Central Intelligence Agency in brief

The Central Intelligence Agency is a civilian foreign intelligence service of the federal government of the United States. Unlike the Federal Bureau of Investigation, which is a domestic security service, the CIA has no law enforcement function. It is the only agency authorized by law to carry out and oversee covert action at the behest of the President. The agency has been the subject of many controversies, including human rights violations, domestic wiretapping and propaganda, and allegations of drug trafficking. It has also appeared in works of fiction, including books, films and video games. The CIA director interfaces with the Director of National Intelligence, Congress, and the White House. The Executive Director is in charge of the day-to-day operation of the CIA. The Deputy Director is formally appointed by the Director without Senate confirmation, but as the President’s opinion plays a great role in the decision, the Deputy director is generally considered a political position. The Director of Military Affairs manages the relationship between the CIA and the Unified Combatant Commands, who produce and deliver to the CIA regionaloperational intelligence. In 2013, The Washington Post reported that in the fiscal year 2010,. the CIA had the largest budget of all IC agencies, exceeding previous estimates. One of its largest divisions, the Information Operations Center, has officially shifted focus from counter-terrorism to offensive cyber-operations. The Directorate of Operations foreign intelligence is responsible for collecting for U.S. American, Asian, Pacific, Latin and African intelligence. The name reflects coordinator of human intelligence between other elements of the wider intelligence community with their HUMINT operations.

This Directorate was created in an attempt to end years of rivalry between the U. S. Defense Department and CIA. In spite of this, the Department of Defense recently organized its own global clandestine intelligence service,. the Defense Clandestine Service under the Defense Intelligence Agency. This Directorate is known to be organized by geographic issues, but its precise organization is not known. It was established to create technical disciplines and manage technical equipment. Many innovations were transferred to other intelligence organizations, including the Directorate of Science & Technology, which was created to create and manage scientific and technical research, and manage intelligence collection, and other equipment. It also has an office dedicated to Iraq; regional analytical offices covering the Near East and South Asia, Russia and Europe; and the Pacific and Latin American offices, which were created in the 1990s. TheCIA has an executive office and five major directorates: The CIA has four regional analytic groups, six groups for transnational issues, and three that focus on policy,collection, and staff support. According to its fiscal 2013 budget, theCIA has five priorities: the CIA Director, the Chief Operating Officer and the Associate Director of military affairs, who is the most senior non-political position for CIA career officers. The CIA Director is appointed by President Obama with Senate confirmation and reports directly to the director of national Intelligence. The director is the internal executive of theCIA and the Chief operating Officer is known as Executive Director until 2017.

You want to know more about Central Intelligence Agency?

This page is based on the article Central Intelligence Agency published in Wikipedia (as of Jan. 04, 2021) and was automatically summarized using artificial intelligence.

Director of the Central Intelligence Agency

Director of the Central Intelligence Agency