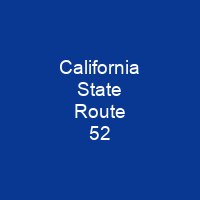 State Route 52 is a freeway in San Diego County, California. It runs from Interstate 5 in La Jolla to SR 67 in Santee. It is not part of the National Highway System, but is eligible for the Freeway Expressway System and the State Scenic Highway System. Construction began in 1966 and was completed in 2011, more than 50 years after construction began.

About California State Route 52 in brief

State Route 52 is a freeway in San Diego County, California. It runs from Interstate 5 in La Jolla to SR 67 in Santee. SR 52 is also known as the Soledad Freeway and the San Clemente Canyon Freeway. It is not part of the National Highway System, but is eligible for the Freeway Expressway System and the State Scenic Highway System. Construction began in 1966 and was completed in 2011, more than 50 years after construction began. The freeway runs north of the Rose Canyon Fault and Mount SoledAd. It passes north of Marine Corps Air Station Miramar and Mission Trails Regional Park. It ends at an end at SR67 in the city of Santee, where it is a major east–west route through the northern part of San Diego. The road connects the major north–south freeways of the county, including I-5, I-805, SR 163, and I-15, as well as Mission Gorge Road and SR 125. It was officially designated in the 1964 state highway renumbering and was built in two stages from there to Santo Road in 1988. The extension to Mission Gorge road opened in 1993, andSR 52 was completed toSR 125 in 1998. A dedicated two-way bicycle path exists on the northern side of the roadway between Santo Road and Mast Boulevard, with access possible from both termini. In 2016, Caltrans officially designated the segment to Mission  Trail’s Regional Park as a scenic highway, but the highway is not a national scenic highway. The highway is part of California’s Freeways and Expressways System and is not eligible for National Highway and Freeway System status, though it may be eligible for a number of other state and local highway designations, such as the California Highways System or the California State Highways and Freeways System.

The state highway system is a joint effort between the California Department of Transportation and the California Public Works Agency (CDPW) to improve the state’s highway system. The CDPW has a contract with Caltrans for the construction of the highway from 2010 to 2015. The route is not expected to be fully completed until at least 2023, when the state plans to build a new freeway from San Diego to Los Angeles. It has been named the San Diego Freeway for its entire length and serves as a major north-south route through San Diego’s northern suburbs. It begins at the eastern end of La Jollas Parkway and ends at the northern end of the city’s Tierrasanta neighborhood. It goes through Mission Trail Regional Park, an open space preserve, for a few miles. It then passes the 1,230-foot summit of Fortuna Mountain. It intersects I-163, a freeway heading towards downtown San Diego, before an interchange with Convoy Street, and intersects Kearny Villa Road. It enters the southern edge of the MCAS Miramar military base and passes the Miramar Recycling Center. It leaves the base and traverses Mission Trail before intersecting I-125.

You want to know more about California State Route 52?

This page is based on the article California State Route 52 published in Wikipedia (as of Nov. 02, 2020) and was automatically summarized using artificial intelligence.