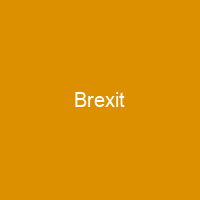 After a UK-wide referendum in June 2016, 52% voted in favour of leaving the EU and 48% voted to remain a member. On 29 March 2017, the new British Government led by Theresa May formally notified the EU of the country’s intention to withdraw. The UK left the EU at the end of 31 January 2020 CET.

About Brexit in brief

The UK is the first and only country formally to leave the EU, after 47 years of membership. It is also thought to be the first country to withdraw voluntarily from an economic and monetary union of countries. After a UK-wide referendum in June 2016, in which 52% voted in favour of leaving the EU and 48% voted to remain a member, Prime Minister David Cameron resigned. On 29 March 2017, the new British Government led by Theresa May formally notified the EU of the country’s intention to withdraw. The UK left the EU at the end of 31 January 2020 CET. This began a transition period that ended on 31 December 2020 CET, during which the UK and EU are negotiating their future relationship. During the transition, the UK remains subject to EU law and remains part of the EU customs union and single market. However, it is no longer part of EU’s political bodies or institutions. The broad consensus among economists is that Brexit will likely harm the UK’s economy and reduce its real per capita income in the long term, and that the referendum itself damaged the economy. Many effects of Brexit depend on how closely the UK will be tied to the EU. The European Union Act 2018 retains relevant EU law as domestic law, which UK could then amend or repeal. It was delayed by deadlock in the British Parliament after the June 2017 general election, which resulted in a hung parliament in which the Conservatives lost their majority but remained the largest party. The deadlock was resolved after a subsequent general election was held in December 2019. In that election, Conservatives who campaigned in support of a \”revised\” withdrawal agreement led by Boris Johnson won an overall majority of 80 seats.

After the December 2019 election, the British parliament finally ratified the withdrawal agreement. The withdrawal was originally scheduled for 29 March 2019, but it was delayed because of the hung parliament and subsequent general elections. Under Boris Johnson’s government the UKleft the EU on 31 Jan 2020 CET; trade deal negotiations continued to within days of the scheduled end of the transition period on 31 Dec 2020 CET. In the UK, the referendum was held on June 23, 2016, with 52% of the vote in favour, 48% against and 51% undecided. The public had previously approved membership of the EC in a 1975 referendum, but no further referendums were held as the project grew and became \”ever-closer\” in the subsequent Maastricht and Lisbon treaties. The British Parliament was not ratified by the EU in 1993, but was not put to a referendum on the European Constitution. The EU was not ratifying the Treaty of Lisbon in 2008 without a previous promise to hold a referendum. The Eurosceptic wing of the Conservative Party led a rebellion over the treaty and led the UK Independence Party and the cross-party People’s Pledge to ratify the treaty. The treaty was also ratified by the British Independence Party in 1993 but not by the UK Parliament in 1994. The referendum was eventually held in June 2012, but the Conservative prime minister David Cameron had abandoned a promise to put the treaty to a vote.

You want to know more about Brexit?

This page is based on the article Brexit published in Wikipedia (as of Jan. 04, 2021) and was automatically summarized using artificial intelligence.