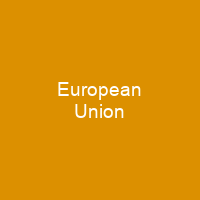 The European Union is a political and economic union of 27 member states that are located primarily in Europe. Its members have a combined area of 4,233,255. 3 km2 and an estimated total population of about 447 million. Containing some 5. 8% of the world population in 2020, the EU had generated a nominal gross domestic product of around US$15. 5 trillion in 2019.

About European Union in brief

The European Union is a political and economic union of 27 member states that are located primarily in Europe. Its members have a combined area of 4,233,255. 3 km2 and an estimated total population of about 447 million. A monetary union was established in 1999, coming into full force in 2002, and is composed of 19 EU member states which use the euro currency. Containing some 5. 8% of the world population in 2020, the EU had generated a nominal gross domestic product of around US$15. 5 trillion in 2019. The EU inherited many of its present responsibilities from the European Communities, which were founded in the 1950s in the spirit of the Schuman Declaration. Due to its global influence, the European Union has been described by some scholars as an emerging superpower. It maintains permanent diplomatic missions throughout the world and represents itself at the United Nations, the World Trade Organization, the G7 and the G20. The United Kingdom became the first member state to leave the EU on 31 January 2020. Before this, three territories of member states had left the EU or its forerunners. The latest major amendment to the constitutional basis of the EU, the Treaty of Lisbon, came into force in 2009. The European Union was awarded the Nobel Peace Prize in 2012. The term United States of Europe was used at that time by Victor Hugo during a speech at the International Peace Congress held in Paris in 1849. A day will come when we will see a European brotherhood on our continent, especially especially when we see a time when we shall see a European brotherhood.

A time that will come especially when our nations will form a European family. A day when we see a European brotherhood on the continent. The EU has often been described as a sui generis political entity. The EU and European citizenship were established when the Maastricht Treaty came into Force in 1993. The Union has developed an internal single market through a standardised system of laws that apply in all member states in those matters, and only those matters where members have agreed to act as one. The union has developed a role in external relations and defence through the Common Foreign and Security Policy, the Common Security Policy and the Common Agricultural Policy. It has a very high Human Development Index according to the U.N. Development Programme (UNDP) The EU is the world’s largest trading bloc, accounting for 18% of global nominal GDP in 2019, constituting approximately 18% ofglobal nominal GDP. In the oriental parts of the continent, the Russian Tsardom, and ultimately the Empire, declared Moscow to be Third Rome and inheritor of the Eastern tradition after the fall of Constantinople in 1453. In 2004, Pan-European political thought truly emerged during the 19th century, inspired the liberal ideas of the French and American Revolutions after the demise of Napoléon’s Napoleonic Empire. In the decades following the outcomes of the Congress of Vienna, the ideals of European unity flourished across the continent,.

You want to know more about European Union?

This page is based on the article European Union published in Wikipedia (as of Jan. 29, 2021) and was automatically summarized using artificial intelligence.