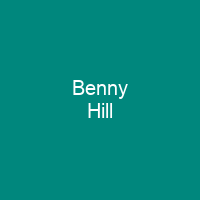 Alfred Hawthorne \”Benny\” Hill was an English comedian, actor, singer and writer. He is best remembered for his television programme The Benny Hill Show, an amalgam of slapstick, burlesque, and double entendre. In 2006, Hill was voted by the British public number 17 in ITV’s poll of TV’s 50 Greatest Stars. Hill was a prominent figure in British culture for nearly four decades.

About Benny Hill in brief

Alfred Hawthorne \”Benny\” Hill was an English comedian, actor, singer and writer. He is best remembered for his television programme The Benny Hill Show, an amalgam of slapstick, burlesque, and double entendre. In 2006, Hill was voted by the British public number 17 in ITV’s poll of TV’s 50 Greatest Stars. Hill’s film credits include parts in five full-length feature films including Who Done It?, Light Up the Sky!, Those Magnificent Men in their Flying Machines, Chitty Chitty Bang Bang and The Italian Job. He also made two short-subject films, The Waiters and Eddie in August, the latter being a TV production. Hill also appeared in the 1986 video of the song \”Anything She Does\” by the band Genesis. He changed his name to ‘Benny’ in homage to his favourite comedian, Jack Benny. Hill was a prominent figure in British culture for nearly four decades. His show proved to be one of the great success stories of television comedy and was among the most-watched programmes in the UK with the audience peaking at more than 21 million in 1971. Hill had struggled on stage and had uneven success in radio, but in television he found a forum that played to his strengths. His audio recordings include ‘Gather in the Mushrooms’, ‘Pepys’ Diary’, ‘Transistor Radio’, ‘Harvest of Love’ and ‘Ernie’, which was the UK Singles Chart Christmas number-one single in 1971, and ‘The Best of Benny Hill’, a theatrically released compilation of his early Thames Television shows.

The most common gag in Hill’s shows was the ‘run-off’ sequence, which was literally a running gag in which various members of the cast, along with Hill, chasing other characters, would chase each other along the screen. Hill played a number of characters in the series, such as Harry Hill and Fred Scuttle. In 1964, he played Nick Bottom in an all-star TV film production of William Shakespeare’s A Midsummer Night’s Dream. In addition, he attempted a sitcom anthology, Benny Hill, which ran from 1962 to 1963, in which he played a different character in each episode. In 1969, his show moved from the BBC to Thames Television, where it remained until 1989, with an erratic schedule of one-hour specials. Hill mostly remained with the BBC through to 1968, except for a few sojourns between 1957 and 1960, when he moved to ITV and ATV stations again in 1967 and 1960. He was a frequent supporting player with Hill slapping him on the top of his head. Short, bald Jackie Wright was one of his frequent supporting players on his show during the BBC years including Patricia Hayes, Jeremy Hawk, Peter Vernon, Ronnie Brody, and his co-writer from the early 1950s to early 1960s, Dave Freeman. Hill was called up in 1942 and trained as a mechanic in the Royal Electrical and Mechanical Engineers, British Army. After the Second World War, Hill worked as a performer on radio.

You want to know more about Benny Hill?

This page is based on the article Benny Hill published in Wikipedia (as of Jan. 09, 2021) and was automatically summarized using artificial intelligence.