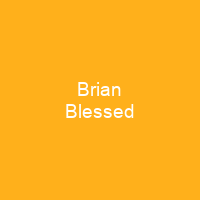 Brian Blessed OBE is an English actor, writer and television presenter. He is known for his roles in Z-Cars, I, Claudius, Flash Gordon and Cats. In 2016, Blessed was appointed Officer of the Order of the British Empire.

About Brian Blessed in brief

Brian Blessed OBE is an English actor, writer and television presenter. He is known for his roles in Z-Cars, I, Claudius, Flash Gordon and Cats. In 2016, Blessed was appointed Officer of the Order of the British Empire for services to the arts and charity. Blessed was born on 9 October 1936 at Montagu Hospital in Mexborough, Yorkshire, the son of William Blessed and Hilda Wall. He has appeared in a number of Shakespearean roles on both stage and screen, including four of the five Shakespeare films directed by Kenneth Branagh. He also voiced Clayton in Disney’s Tarzan and Boss Nass in Star Wars: Episode I – The Phantom Menace, and was also the voice of Jean Valjean in the Family Theatre’s adaptation of Les Misérables. He read the story of The White City for the album Late Night Tales, recording it in four parts over four albums, and later reprised it in the video game The Big Knights of Misérable. Blessed has also appeared in the BBC TV series The Big Knight, and in the critically acclaimed Kingdom Hearts in 2002.

He was offered the titular role of The Doctor in BBC’s sci-fi drama, Doctor Who, to take over from William Hartnell, but had to turn down due to conflicting projects. He appeared as Long John Silver in the 10-part serial Return to Treasure Island, King Yrcanos in the Doctor Who serial Mindwarp, General Yevlenko in the mini-series War and Remembrance, and Lord Loxley, the father of Robin Hood, in the Hollywood film Robin Hood: Prince of Thieves. In 1981, Blessed starred in Andrew Lloyd Webber’s musical, Cats, as both Old Deuteronomy and Bustopher Jones, for the original West End theatre production. In 1997, Blessed portrayed Squire Western in BBC adaptation of Henry Fielding’s 1749 comic novel Tom Jones. He later recalled accidentally punching Peter Capaldi whilst filming the event for the blustery CGI character Boss Nass. He said of Capaldi: “I thought I’d killed the poor bastard’s poor bastard.”

You want to know more about Brian Blessed?

This page is based on the article Brian Blessed published in Wikipedia (as of Jan. 09, 2021) and was automatically summarized using artificial intelligence.

From the Doctor to My Son Thomas

From the Doctor to My Son Thomas