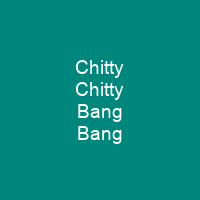 Chitty Chitty Bang Bang is a 1968 musical-fantasy film directed by Ken Hughes. It is loosely based on Ian Fleming’s novel Chitty-Chitty-Bang-Bang: The Magical Car. The song “Chitty, Chitty, Bang Bang” was nominated for an Academy Award.

Chitty Chitty Bang Bang is a 1968 musical-fantasy film directed by Ken Hughes. It is loosely based on Ian Fleming’s novel Chitty-Chitty-Bang-Bang: The Magical Car. The film stars Dick Van Dyke, Sally Ann Howes, Adrian Hall, Heather Ripley, Lionel Jeffries, Benny Hill, James Robertson Justice, Robert Helpmann, and Gert Fröbe. The song “Chitty, Chitty, Bang Bang” was nominated for an Academy Award. The story opens with a montage of European Grand Prix races in which one particular car appears to win every race it runs in from 1907 until its final race in 1909. The car eventually ends up in an old garage in rural England, where two children, Jeremy and Jemima Potts, have grown fond of it. A man in the scrapyard intends to buy the car from the garage owner, Mr. Coggins, for scrap. The children implore their widowed father Caractacus Potts and the family’s equally peculiar grandfather, but he cannot afford it. They name the car ‘Chitty’ for the unusual noise of its engine. The Baron sends two spies to capture the car, but they capture Lord Scrumptious, then Grandpa Potts by accident, mistaking each for the car’s creator. Chitty deploys huge flotation devices and transforms into a power boat, and they manage to escape Bomburst’s yacht and return to shore. They concoct a scheme to free the children from the Baron’s Child Catcher who poses as a candy vendor.

They find a land without children; Baroness Bomburst fears and abhors and imprisons any children she finds. The Potts’ party is helped and hidden by the local Toymaker, who now works for the childish Baron. The townspeople have been hiding beneath the castle where the children have been kidnapped by the Baron and have been taken to a town where the Toymaker has made them food. The Toymaker takes the children to a grotto beneath the town and hides them beneath the grotto. They are then taken to the town by the Toymakers’ toymaker and search for food, but the children are kidnapped by a child who has been made to work for the Baron. They then find the children and hide beneath the Grotto, where the Baron has made the children work for him and has hidden them in a candy shop. They eventually escape and find their way back to the village. The movie was released in UK cinemas on November 14, 1968. It was released worldwide on November 25, 1968, in the US on November 27, 1968 and in the UK on November 28, 1968 in the United States on November 29, 1969, and in Australia on November 30, 1969 and in Canada on November 31, 1969. The UK release date is the same day as the US release date for the UK release of the UK version of the film.

You want to know more about Chitty Chitty Bang Bang?

This page is based on the article Chitty Chitty Bang Bang published in Wikipedia (as of Dec. 10, 2020) and was automatically summarized using artificial intelligence.