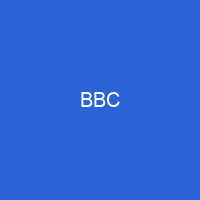 The British Broadcasting Corporation is a public service broadcaster. It is funded principally by an annual television licence fee. Since 1 April 2014, it has also funded the BBC World Service. It broadcasts in 28 languages and provides comprehensive TV, radio and online services in Arabic and Persian.

About BBC in brief

The British Broadcasting Corporation is a public service broadcaster. It is funded principally by an annual television licence fee. The fee is set by the British Government, agreed by Parliament. Since 1 April 2014, it has also funded the BBC World Service. It broadcasts in 28 languages and provides comprehensive TV, radio, and online services in Arabic and Persian. Around a quarter of BBC’s revenue comes from its commercial subsidiary BBC Studios. It sells BBC programmes and services internationally and also distributes the BBC’s international 24-hour English-language news services BBC World News, and from BBC Global News Ltd. In 2009, the company was awarded the Queen’s Award for Enterprise in recognition of its international achievements. The BBC is also known colloquially as \”The Beeb\”, \”Auntie\”, or a combination of both. It is the world’s oldest national broadcaster, and the largest broadcaster in the world by number of employees. It employs over 22,000 staff in total, of whom more than 16,000 are in public sector broadcasting. The total number of BBC staff amounts to 35,402 including part-time, flexible, and fixed-contract staff. The corporation was established under a Royal Charter and operates under its Agreement with the Secretary of State for Digital, Culture, Media and Sport. It has played a prominent role in British life and culture from its inception through the Second World War to the popularisation of television in the post-WW2 era and the internet in the late 20th and early 21st centuries. It was founded by John Reith, a Scottish Calvinist, who was appointed its general manager in December 1922 a few weeks after the company made its first official broadcast.

The company was to be financed by a royalty on the sale of BBC wireless receiving sets from approved domestic manufacturers. To this day, the BBC aims to follow the Reithian directive to \”inform, educate and entertain\”. The financial arrangements soon proved inadequate as amateurs made their own receivers and listeners bought rival unlicensed sets. By late 1920, pressure from these quarters and uneasiness among the staff of the licensing authority, the General Post Office, was sufficient to lead to a ban on further Chelmsford broadcasts. But by 1922, the GPO had received nearly 100 broadcast licence requests and moved to rescind its ban in the wake of a petition by 63 wireless societies with over 3,000 members. The GPO proposed that it would issue a single broadcasting licence to a company jointly owned by a consortium of leading wireless receiver manufacturers, to be known as the British Broadcasting Company Ltd. By 1926, BBC’s leadership had forged a consensus in favour of a unified broadcasting service, but more money was still required to finance rapid expansion. The newspaper production strike interrupted production in May 1926 and the BBC was temporarily interrupted in May 1927 when the general strike broke out. By the end of that year, BBC was required to source all its news bulletins from external wire services. Mid-1925, a committee found the future of broadcasting under the BBC under further consideration, now, under the Royal Charter.

You want to know more about BBC?

This page is based on the article BBC published in Wikipedia (as of Feb. 11, 2021) and was automatically summarized using artificial intelligence.