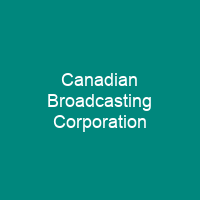 The Canadian Broadcasting Corporation is the national public broadcaster for both radio and television. The English- and French-language service units of the corporation are commonly known as CBC and Radio-Canada. The CBC was established on November 2, 1936. It operates four terrestrial radio networks: CBC Radio One and CBC Music, and the French-Language Ici Radio- Canada Première and Ici Musique.

About Canadian Broadcasting Corporation in brief

The Canadian Broadcasting Corporation is the national public broadcaster for both radio and television. The English- and French-language service units of the corporation are commonly known as CBC and Radio-Canada, respectively. The CBC was established on November 2, 1936. It operates four terrestrial radio networks: CBC Radio One and CBC Music, and the French-Language Ici Radio- Canada Première and Ici Musique. It also operates two terrestrial television networks, the English-Language CBC Television and theFrench-language IciRadio-Canada Télé. In 2013, CBC’s secondary radio networks introduced limited advertising of up to four minutes an hour, but this was discontinued in 2016. In 1978, CBC became the first broadcaster in the world to use an orbiting satellite for television service, linking Canada to the west. The first Canadian television show in colour was the CBC’s own Forest Rangers in 1963. CBC’s full colour television broadcasts commenced on July 1, 1966, and full-colour broadcasts began in 1974. It owns 20. 2% of satellite radio broadcaster Sirius XM Canada, which carries several CBC-produced audio channels. CBCRadio- Canada offers programming in English, French and eight aboriginal languages on its domestic radio service, and in five languages on the web-based international radio service Radio Canada International. The radio service employed commercials from its inception to 1974, but since its primary radio networks have been commercial-free. However, budget cuts in the early 2010s have contributed to the corporation reducing its service via the airwaves, discontinuing RCI’s shortwave broadcasts as well as terrestrial television broadcasts in all communities served by network-owned rebroadcast transmitters, including communities not subject to Canada’s over-the-air digital television transition.

The Canadian Radio Broadcasting Commission (CRBC) was established in 1932 by the government of R. B. Bennett. The CRBC took over a network of radio stations formerly set up by a federal Crown corporation, the Canadian National Railway. It was used to broadcast programming to riders aboard its passenger trains, with coverage primarily in central and eastern Canada. Until 1958, the CBC was not only a broadcaster, but the chief regulator of Canadian broadcasting. It used this dual role to snap up most of the clear-channel licences in Canada. It introduced FM radio to Canada in 1946, though a distinct FM service was not launched until 1960. The latter, carrying lighter programs including American radio shows, was dissolved in 1962, while the former CBC became known as Radio Radio Canada. The former CBC was dissolved and the former Radio Radio became the CBC Radio Corporation of Canada (CRCC) The CBC’s first television station, CKSO in Sudbury, Ontario, launched in October 1953. It split into English-language radio network, the Trans-Canada Network and the Dominion Network in 1962. It became the broadcaster’s own contribution to satellite television, linking east to west to west in the 1960s and ’70s. CBC Radio 3, CBC MusicICI. mu and ICI. TOU TV, and CBC Radio. ca, are CBC’s digital services including CBC. caIci.

You want to know more about Canadian Broadcasting Corporation?

This page is based on the article Canadian Broadcasting Corporation published in Wikipedia (as of Dec. 07, 2020) and was automatically summarized using artificial intelligence.