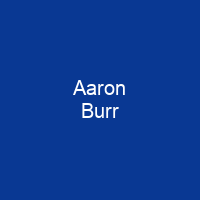 Aaron Burr Jr. was an American politician and lawyer. He served as the third vice president of the United States during President Thomas Jefferson’s first term from 1801 to 1805. Burr’s legacy is defined by his famous personal conflict with Alexander Hamilton which culminated in Burr killing Hamilton in the famous Burr–Hamilton duel in 1804. Burr died at a boarding house in 1836.

About Aaron Burr in brief

Aaron Burr Jr. was an American politician and lawyer. He served as the third vice president of the United States during President Thomas Jefferson’s first term from 1801 to 1805. Burr’s legacy is defined by his famous personal conflict with Alexander Hamilton which culminated in Burr killing Hamilton in the famous Burr–Hamilton duel in 1804. Burr was born to a prominent family in New Jersey. After studying theology at Princeton, he began his career as a lawyer before joining the Continental Army as an officer in the American Revolutionary War in 1775. After leaving the service in 1779, Burr practiced law in New York City, where he became a leading politician and helped form the new Jeffersonian Democratic-Republican party. In 1791, Burr was elected to the U.S. Senate. Burr traveled west to the American frontier, seeking new economic and political opportunities. His secretive activities led to his 1807 arrest in Alabama on charges of treason. He was brought to trial more than once for what became known as the Burr conspiracy, but was acquitted each time. Handicapped by a stroke and financially ruined, Burr died at a boarding house in 1836. Burr had a relationship with his South Asian servant Mary Emmons, with whom he fathered two children, including the abolitionist John Pierre Burr, though he never publicly acknowledged this relationship during his life. Burr married Theodosia Bartow Prevost, who died in 1794 after twelve years of marriage. He also had a brief second marriage at age 77, which resulted in divorce and further scandal.

Burr also had an older sister Sarah, who was named for her maternal grandmother. Burr served in the Continental War during the Revolutionary War, and took part in part in Colonel Benedict Arnold’s expedition to Quebec, more than 300 miles through the frontier of Maine. At age 19, he moved to Connecticut to study law with his brother-in-law Tapping Reeve, founder of the Litchfield Law School. Burr maintained that he supported Jefferson, but the president was highly suspicious of Burr. Burr was relegated to the sidelines of the administration for the single term of his vice presidency. Burr and his sister Sarah were orphans when he was two years old, and Burr’s mother, and grandmother also died within the year, leaving Burr and her sister orphans. Burr became a Presbyterian minister and later became the second president of Princeton University. He had a very strained relationship withHis maternal uncle Timothy Edwards was often physically abusive, and he had several attempts to run away from home as a child. In 1772, he received his Bachelor of Arts degree at Princeton. Burr then undertook rigorous theological training with Joseph Bellamy, but changed his path after two years. He then joined the American Revolution and served as a part of Colonel Arnold’s expedition in Quebec, Canada. Burr later became a member of the Revolutionary Army. He died in 1805 in the Burr duel in which he fatally shot Hamilton, his political rival. Although dueling was illegal, Burr never tried, and all charges against him eventually were dropped.

You want to know more about Aaron Burr?

This page is based on the article Aaron Burr published in Wikipedia (as of Dec. 07, 2020) and was automatically summarized using artificial intelligence.