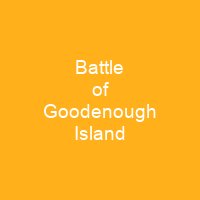 The Allies landed on Goodenough Island, Papua, and clashed with a Japanese Kaigun Rikusentai. The Japanese troops had been stranded on the island during the Battle of Milne Bay in late August 1942. It is the northernmost of the D’Entrecasteaux Islands to the north-east of Papua, separated by the 15-mile wide Ward Hunt Strait.

About Battle of Goodenough Island in brief

The Allies landed on Goodenough Island, Papua, and clashed with a Japanese Kaigun Rikusentai. The Japanese troops had been stranded on the island during the Battle of Milne Bay in late August 1942. The island was developed into a major Allied base for operations later in the war. It is the northernmost of the D’Entrecasteaux Islands to the north-east of Papua, separated by the 15-mile wide Ward Hunt Strait. Its position along the sea route between Buna and MilneBay made it strategically important during late 1942. An Allied presence on the Island could provide warning of Japanese operations while denying the Japanese the opportunity to conduct operations or surveillance. Goodenough is 65 miles by sea from Milnebay and 185 miles from Port Moresby. It was also suitable for airfield development, but the best anchorages were at Mud Bay on the south-eastern side, Taleba Bay on south-western, and Beli Beli Bay on eastern side. Other sites were obstructed by coral reefs or exposed to the weather, or could only accommodate shallow-draught vessels drawing 12 feet or less, making them unsuitable for development. It had no roads, and there was no motor or animal transport. Neither the interior of the island nor the surrounding waters were adequately charted in 1942. In early August 1942, a small detachment of an American fighter control squadron had been stationed on Good Enough Island to provide advance warning to the Australian fighters based at Milne bay.

On 7 August, five Royal Australian Air Force P-40 Kittyhawks of No.  76 Squadron made forced landings on the grassy plains. One crashed on landing and had to be written off, but after makeshift airstrips were cut through the grass, the remaining four were able to fly out again. On 24 August, seven landing craft carrying 353 Japanese Special Naval Landing Forces troops of Commander Torashige Tsukioka’s 5th Sasebo Special Naval landing Force, set out from Cape Nelson in the dark to participate in the attack on the Allied forces. On 27 October, the Allies located the landing craft and destroyed all seven, along with the Japanese’s radio and its stores. The air raid killed eight Japanese; the Japanese survivors, lacking their own transport force, were stranded on goodenough Island. Meanwhile, the Allied force on GoodEnough Island destroyed its radios and withdrew from the island. On 9 September, an orderly who had made his way back to Buna in a canoe reached the Japanese island. They did not locate the Japanese destroyers, but did locate five Boeing B17 Flying Fortresses but did not destroy them. The destroyers destroyers USS self-ridge, USS Selfridge, Henley Bagley and Captain Cornelius W. Flynn, were detached from Task Force 44 to intercept the Japanese. On 10 September, Allied men set out to rescue the men. The next day, Allied aircraft sighted them the next day.

You want to know more about Battle of Goodenough Island?

This page is based on the article Battle of Goodenough Island published in Wikipedia (as of Nov. 01, 2020) and was automatically summarized using artificial intelligence.

Battle of the Bismarck Sea

Battle of the Bismarck Sea