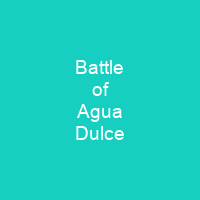 Mexican troops ambushed a group of Texians on March 2, 1836. The skirmish began approximately 26 miles south of San Patricio, in territory belonging to the Mexican state of Tamaulipas. Six Texians were taken prisoner; contrary to Santa Anna’s orders, Urrea did not execute them.

About Battle of Agua Dulce in brief

The Battle of Agua Dulce Creek was a skirmish during the Texas Revolution. Mexican troops ambushed a group of Texians on March 2, 1836. The skirmish began approximately 26 miles south of San Patricio, in territory belonging to the Mexican state of Tamaulipas. Six Texians were taken prisoner; contrary to Santa Anna’s orders, Urrea did not execute them, but instead sent them to a jail in Matamoros. An additional six Texians escaped; five of them later died in the Goliad massacre. The Mexican Army quickly put down revolts throughout the country’s interior, including a brutal suppression of militias in Oaxaca and Zacatecas. The area that bordered the United States, known as Texas, was populated primarily by English-speaking settlers. In October, the Texians took up arms in what became known as the Texas revolution. By the end of the year, all Mexican troops had been expelled from Texas. In late December, the Mexican Congress passed the Tornel Decree, declaring that any fighting against Mexican troops will be deemed pirates and dealt with as such. In the early nineteenth century, captured pirates were executed immediately. The resolution thus gave the Mexican Army permission to take no prisoners in the war against Texians. The efforts to quell the rebellion along the Texas Gulf Coast have become known as GoliAD Campaign.

The main body of the Texian and Tejano troops were defeated after a brief battle, and two others escaped the battle and were pursued for 7 miles. Grant was killed, as were 11 men under his command. The following month, Texians declared themselves part of a Mexican state independent from Coahuila and created a provisional state government based on the principles of the Constitution of 1824. Leading federalists in Mexico advocated a plan to attack centralist troops inMatamoros, a major Mexican port. They hoped it would inspire other federalist states to revolt and keep the bored Texian troops from deserting the army. The Council officially approved the plan on December 25, and on December 30 Frank W. Johnson, the commander of the volunteer army in Texas, and his aide James Grant took the bulk of the army and almost all of the supplies to Goliads to prepare for the expedition. The invasion of Matamoris was a way to tie Texas more tightly to Mexico. Santa Anna began assembling a large force to restore order in late December. In early 1836, Santa Anna personally led the bulk. of his troops to San Antonio de Béxar and ordered General José de Urrea to lead 550 troops along the Atascocita Road toward Texas.

You want to know more about Battle of Agua Dulce?

This page is based on the article Battle of Agua Dulce published in Wikipedia (as of Oct. 30, 2020) and was automatically summarized using artificial intelligence.