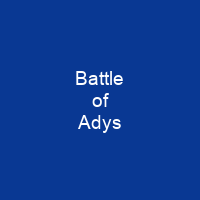 The First Punic War between Carthage and Rome began in 264 BC. Rome had recently unified mainland Italy south of the Arno. The immediate cause of the war was a wish to control the Sicilian town of Messana. The focus of theWar shifted to the sea where the Romans had little experience.

About Battle of Adys in brief

The First Punic War between Carthage and Rome began in 264 BC. Rome had recently unified mainland Italy south of the Arno. The immediate cause of the war was a wish to control the Sicilian town of Messana. By 260 BC the war had grown into a struggle in which the Romans at least wanted control the whole of Sicily. Both sides were determined to establish naval supremacy and invest large amounts of money and manpower in maintaining their navies. The Romans set out to use a shipwrecked Carthaginian quinquereme as a blueprint for their own fleet. The Carthaginians were engaging in their traditional policy of waiting for their opponents to wear themselves out, in the expectation of then regaining some or all of their possessions and negotiating a mutually satisfactory peace treaty. The main source for almost every aspect of the War is the historian Polybius, a Greek sent to Rome in 167 BC as a hostage. Modern historians usually take into account the later histories of Diodorus Siculus and Dio Cassius, although the classicist Adrian Goldsworthy states \”Polybius’ account is usually to be preferred when it differs with any of our other accounts\”. Other sources include inscriptions, archaeological evidence and empirical evidence from reconstructions such as the trireme Olympias. The focus of theWar shifted to the sea where the Romans had little experience; they had previously relied on squadrons provided by their allies to use the sea on the few occasions where they had to use their superior army to interfere.

The Roman navy established naval superiority and used this advantage to invade the Carthaginia homeland, which roughly aligned with modern Tunisia in North Africa. The war there had reached a stalemate, as the Carthagenians focused on defending their well-fortified towns and cities; these were mostly on the coast and so could be supplied and reinforced by sea without being able to interfere with the Romans’ superior army. A few months later, at the Battle of the Bagradas River, Regulus was defeated and his army all but wiped out. The Romans advanced to and captured Tunis, only 16 kilometres from Carthage. Despairing, the Carthagoans sued for peace. The terms offered by Regulus were so harsh that Carthage resolved to fight on. The modern consensus is to accept it largely at face value and the details of thewar in modern sources are largely based on interpretations of polybius’s account. It is considered broadly objective and largely neutral between the Carthagineian and Roman points of view. Other, later, ancient histories of the game exist but in fragmentary or summary form and they usually cover military operations on land in more detail than those at sea. The battle of Adys took place in late 255 BC and was won by the Roman army led by Marcus Atilius Regulus. It was fought on a rocky hill near Adys where Regulus had his forces execute a night march to launch twin dawn assaults on the Carthagos’ fortified hilltop camp.

You want to know more about Battle of Adys?

This page is based on the article Battle of Adys published in Wikipedia (as of Dec. 08, 2020) and was automatically summarized using artificial intelligence.