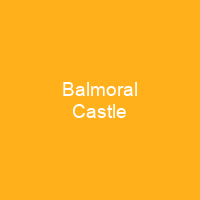 Balmoral Castle is a large estate house in Royal Deeside, Aberdeenshire, Scotland, owned by Queen Elizabeth II. The castle is an example of Scottish baronial architecture, and is classified by Historic Environment Scotland as a category A listed building. The estate was recorded first as Bouchmorale in 1451, the first element in the name Balmoral is the Gaelic both meaning ‘a hut’

About Balmoral Castle in brief

Balmoral Castle is a large estate house in Royal Deeside, Aberdeenshire, Scotland, owned by Queen Elizabeth II. The castle is an example of Scottish baronial architecture, and is classified by Historic Environment Scotland as a category A listed building. Balmoral has been one of the residences of the British royal family since 1852, when the estate and its original castle were bought from the Farquharson family by Prince Albert. The new castle was completed in 1856 and the old castle demolished shortly thereafter. The Balmoral Estate has been added to by successive members of the royal family, and now covers an area of approximately 50,000 acres. It is a working estate, including grouse moors, forestry, and farmland, as well as managed herds of deer, Highland cattle, and ponies. The estate was recorded first as Bouchmorale in 1451, the first element in the name Balmoral is the Gaelic both meaning \”a hut\”. The second part of the name is uncertain, but may conserve a Pictish formation from *mor meaning ‘large’ and *ial, ‘open space’ King Robert II of Scotland had a hunting lodge in the area. In 1798, James Duff, 2nd Earl Fife, acquired Balmoral and leased the castle. In 1848 an arrangement was made—that Prince Albert would acquire the remaining part. of the lease on Balmoral, together with its furniture and staff—without having seen the property first. Queen Victoria and Prince Albert first visited Scotland in 1842, five years after her accession to the throne and two years after their marriage.

The surrounding hilly landscape reminded them of Thuringia, Albert’s homeland in Germany. The royal couple arrived for their first visit on 8 September 1848. Victoria found the house ‘small but pretty’, and recorded in her diary that: ‘All seemed to breathe freedom and peace, and to make one forget the world and its sad turmoils’. The old house was in use as a ballroom and dining room until October 1851, and would serve as a temporary ballroom until the sale of the estate in June 1856. After seeing a corrugated iron cottage at the Great Exhibition of 1851 Prince Albert ordered a pre-fabricated iron building for Balmoral from E Bell & Co. : 5Quickly, the house was confirmed to be too small and, in 1848, John and William Smith were commissioned to design new offices,ottages, and other buildings. Major additions to the old house were also being made by the gardener, James Giles, and possibly by the painter, James Beattie, but they were considered in 1849 by then the estate was considered to be in use by the Queen. Sir Robert Gordon, a younger brother of the 4th Earl of Aberdeen, acquired the lease in 1830. He made major alterations to the original castle at Balmoral in 1830, including baronial-style extensions that were designed by John Smith.

You want to know more about Balmoral Castle?

This page is based on the article Balmoral Castle published in Wikipedia (as of Dec. 08, 2020) and was automatically summarized using artificial intelligence.