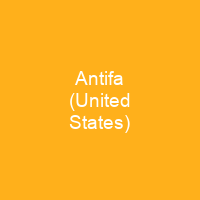 Antifa is a left-wing anti-fascist and anti-racist political movement in the United States. It is highly decentralized and comprises an array of autonomous groups. Some on the American Left criticize antifa for its willingness to adopt violent direct actions. Oxford Dictionaries placed antifa on its shortlist for word of the year in 2017.

About Antifa (United States) in brief

Antifa is a left-wing anti-fascist and anti-racist political movement in the United States. It is highly decentralized and comprises an array of autonomous groups that aim to achieve their objectives through the use of both nonviolent and violent direct action rather than through policy reform. Much of antifa political activism is nonviolent, involving poster and flyer campaigns, mutual aid, delivering speeches, marching in protest, and community organizing. They also engage in protest tactics, seeking to combat fascists and racists such as neo-Nazis, white supremacists, and other far-right extremists. This may involve digital activism, doxing, harassment, physical violence, and property damage against those whom they identify as belonging to the far right. Some on the American Left criticize antifa for its willingness to adopt violent direct actions and for being counterproductive or backfiring by emboldening the right and their allies. Part of the right characterizes it as a domestic terrorist organization or uses antifa as a catch-all term for any left-leaning or liberal protest actions. There have been multiple efforts to discredit antifa groups via hoaxes on social media, many of them false flag attacks originating from alt-right and 4chan users posing as antifa backers on Twitter. Some scholars argue that antifa’s violence such as milkshaking is not equivalent to right-wing violence. Scholars tend to reject the equivalence between antifa and white supremacism. Several analyses, reports, and studies concluded that Antifa is not a major domestic terrorism risk and ranked far- right extremism and white supremacy as the top domestic risk.

During the George Floyd protests in May and June 2020, the Trump administration has blamed antIFA for orchestrating the mass protests; analysis of federal arrests did not find links to antifa. Oxford Dictionaries placed antifa on its shortlist for word of the year in 2017 and stated the word \”emerged from relative obscurity to become an established part of the English lexicon over the course of 2017. The German word Antifa itself first appeared in 1930 and the long form antifaschistisch was borrowed from the original Italian anti-Fascisti. The term antifa was a reaction to the popularization of the term Black Lives Matter. Alexander Reid, who teaches at Portland State University, argues that the term was a quick way to brand part of opposition to the alt-Right, where people who are willing to protest against it are anti-authoritarian, anti-capitalist, andanti-state. He argues that antifa is no more synonymous with being a member of Black lives Matter and believing that black lives matter. The term Antifa became a conservative catch-in term as Donald Trump, administration officials, and right-leaning commentators applied the label to all sorts of left- leaning or liberal Protest actions. He says that the label is a potent one for conservatives because it is a distillation of the violent everything they fear could come to pass in an all-out war.

You want to know more about Antifa (United States)?

This page is based on the article Antifa (United States) published in Wikipedia (as of Jan. 08, 2021) and was automatically summarized using artificial intelligence.