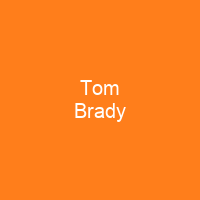 Thomas Edward Patrick Brady Jr. is an American football quarterback for the Tampa Bay Buccaneers of the National Football League. He spent the first 20 seasons of his career with the New England Patriots, where he was a central contributor to the franchise’s dynasty from 2001 to 2019. Brady is considered by many sportswriters, coaches and players to be the greatest quarterback of all time.

About Tom Brady in brief

Thomas Edward Patrick Brady Jr. is an American football quarterback for the Tampa Bay Buccaneers of the National Football League. He spent the first 20 seasons of his career with the New England Patriots, where he was a central contributor to the franchise’s dynasty from 2001 to 2019. Brady is considered by many sportswriters, coaches and players to be the greatest quarterback of all time. After playing college football at Michigan, Brady was selected 199th overall by the Patriots in the sixth round of the 2000 NFL Draft. He joined the Buccaneers in 2020, and led them to win Super Bowl LV, extending his individual records to 10 Super Bowl appearances and seven victories. He is the only NFL quarterback named to two first-team all-decade teams and was named to the 100th Anniversary All-Time Team in 2019. At age 43, he is the oldest player to be named Super Bowl MVP and win a Super Bowl as the starting quarterback, along with being the oldest NFL MVP at age 40 in 2017. Brady’s father is of Irish descent, while his mother has German, Norwegian, Polish, and Swedish ancestry. Two of Brady’s great-great-grandparents on his father’s side, John and Bridget Brady, were Irish refugees from the Great Famine who moved to San Francisco from Boston before the American Civil War. He has three older sisters, Nancy, Julie, and Maureen, and was raised as a Catholic. Brady grew up as a Los Angeles Lakers and Boston Celtics fan. In the 1980s, Brady regularly attended San Francisco 49ers games at Candlestick Park.

He was a fan of quarterback Joe Montana; Brady has called Montana his idol and one of his inspirations. Brady attended Junípero Serra High School in San Mateo, California. He played against Bellarmine College Preparatory rival Pat Burrell in both football and baseball in high school. He became the varsity starter in his junior year and held the position until he graduated. By his senior year, he was striving to be a varsity quarterback. He created highlight tapes and sent them to college coaches. This led to strong interest from many football programs around the nation. The process of recruiting Brady’s football was much different during the time, and athletes were not as prominent as prominent in the football rankings. After his recruiting process, he narrowed down his list to five schools: Cal–Berkeley, UCLA, Michigan, USC, Michigan State, and ultimately pared the list down to UCLA, California, UCLA and UCLA. Brady was also on Blue Chip Illustrated’s All-American Football Report as well as a Prep Prep All-America selection. In 2000, he became the first quarterback to be selected as a member of the Blue Chip All-Americans. In 2001, Brady won the Super Bowl with the Patriots, which saw the Patriots win their first Super Bowl title in Super Bowl XXXVI. As the team’s primary starter for 18 seasons, Brady led the Patriots to 17 division titles, 13 AFC Championship Games, and six Super Bowl titles, all NFL records for a player and franchise.

You want to know more about Tom Brady?

This page is based on the article Tom Brady published in Wikipedia (as of Feb. 11, 2021) and was automatically summarized using artificial intelligence.