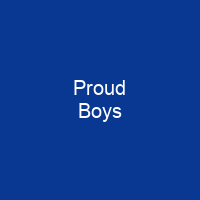 The Proud Boys is a far-right, neo-fascist, and male-only white nationalist organization that promotes and engages in political violence in the United States and Canada. The name is derived from the song “Proud of Your Boy” from the 2011 Disney musical Aladdin. The group has been banned from numerous social networks, including Facebook, Instagram, and Twitter.

About Proud Boys in brief

The Proud Boys is a far-right, neo-fascist, and male-only white nationalist organization that promotes and engages in political violence in the United States and Canada. The name is derived from the song “Proud of Your Boy” from the 2011 Disney musical Aladdin. The group has been banned from numerous social networks, including Facebook, Instagram, and Twitter, as well as YouTube. On February 3, 2021, Canada officially designated the Proud Boys as a terrorist group. The United States Justice Department announced the indictment of members for conspiracy related to the 2021 storming of the U.S. Capitol. The Proud Boys have been described as hipster racists by Vox and Media Matters for America. According to the International Centre for Counter-Terrorism, the group believes men and Western culture are under siege, their views having elements of the white genocide conspiracy theory. In October 2019, members of the Denver chapter marched with members of former Patriot Front members and former members of The Patriot Party. Members have also engaged in multiple racist events and events centered around fascist, anti-left, and anti-socialist violence; expelled member Jason Kessler organized the Unite the Right rally in Charlottesville. The Southern Poverty Law Center has called the group an \”alt-right fight club\”. The organization has been described by NPR’s The Takeaway and The Anti-Defamation League as an “extremist conservative” and an “alt lite” The ADL reports that members subscribe to a scattershot array of libertarian and nationalist ideas, referring to themselves as anti-communist and anti political correctness, but in favor of free speech and free markets.

The organization’s chairman Enrique Tarrio had previously served as an informant to both federal and local law enforcement, according to a former federal prosecutor and the transcripts of a 2014 federal court proceeding. The group officially rejects white supremacy, though the group has nonetheless appeared at multipleracist events. In the song Aladdin, the character Aladdin apologizes to his mother for being a bad son and promises to make her proud. McInnes said it was the most annoying song in the world but that he could not get enough of it. He first heard it while attending his daughter’s school music recital, and the song’s \”fake, humble, and self-serving\” lyrics became a running theme on his podcast. He sees criticism of his views as an incentive to be a victim and white men as being under siege and sees Western culture as a “victim culture” The group is described as an ‘alt-lite’ and is “overtly Islamophobic and misogynistic’ by the Anti-defamation League. It was founded in 2016 under the leadership of Vice Media co-founder and former commentator Gavin Mc innes. Mcinnes distanced himself from the alt-right in early 2017, saying the Proud boys were alt-light while the Alt-right’s focus was on race. The re-branding effort intensified following the white supremacist Unite The Right rally.

You want to know more about Proud Boys?

This page is based on the article Proud Boys published in Wikipedia (as of Feb. 12, 2021) and was automatically summarized using artificial intelligence.