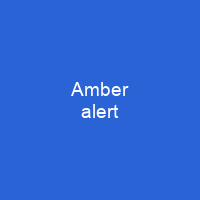 AMBER is a backronym for America’s Missing: Broadcast Emergency Response. The alert was named after Amber Hagerman, a nine-year-old girl abducted and murdered in Arlington, Texas in 1996. The criteria for issuing an alert are rather strict. Each state’s or province’s AMber alert plan sets its own criteria for activation.

About Amber alert in brief

AMBER is a backronym for America’s Missing: Broadcast Emergency Response. The alert was named after Amber Hagerman, a nine-year-old girl abducted and murdered in Arlington, Texas in 1996. In the United States, Amber alerts are distributed via commercial and public radio stations, Internet radio, satellite radio, television stations, text messages, and cable TV. The alerts are also issued via e-mail, electronic traffic-condition signs, commercial electronic billboards, or through wireless device SMS text messages. AMBER Alert has also teamed up with Google, Bing, and Facebook to relay information regarding an AMber Alert to an ever-growing demographic. The criteria for issuing an alert are rather strict. Each state’s or province’s AMBER alert plan sets its own criteria for activation, meaning that there are differences between alerting agencies as to which incidents are considered to justify the use of the system. In Canada, alerts are broadcast via Alert Ready, a Canadian emergency warning system. Alerts usually contain a description of the child and of the likely abductor. When investigators believe that a child is in danger of being taken across the border to either Canada or Mexico, U.S. Customs and Border Protection, United States Border Patrol and the Canada Border Services Agency are notified and are expected to search every car coming through a border checkpoint. In 2013, West Virginia passed Skylar’s Law to eliminate #1 as a criterion for triggering an Amber Alert. The U. S. Department of Justice developed the Child Abduction Response Teams program to assist agencies with all missing children’s cases.

This program can also be used to help recover children under the age of 18 who are in danger. As of 2010, 225 of these teams have been trained in 43 states as well as Washington, D. C., Puerto Rico, the Bahamas, the Canada and the Bahamas. Many law enforcement agencies have not used #2 as a. criterion, resulting in many parental abductions triggering an amber Alert, where the child is not known or assumed to be at risk of serious injury or death. In some states, the display scrollboards in front of lottery terminals are also used. For incidents which do not meet #1, the AMBER alerts can be used in all missing or missing children’s cases with an AMBERAlert program. It is recommended that AMbered Alert data immediately be entered into the Federal Bureau of Investigation National Crime Information Center. Text information describing the circumstances surrounding the abduction of a child should be entered, and the case flagged as child abduction. The Royal Canadian Mounted Police’s requirements in Canada are nearly identical to the above list, with the exception that the RCMP instead of the FBI is normally notified. Alerts are offered by law as free messages. Those interested in subscribing to receive AMBer Alerts in their area via SMS messages can visit Wireless Amber Alerts, which are offered as free Messages. The Alerts can be found on Google Child Alert, which is already active in the US.

You want to know more about Amber alert?

This page is based on the article Amber alert published in Wikipedia (as of Feb. 07, 2021) and was automatically summarized using artificial intelligence.