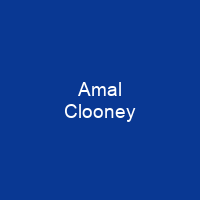 Amal Alamuddin is a Lebanese-British barrister at Doughty Street Chambers. Her clients include Julian Assange, Yulia Tymoshenko and Nadia Murad. In 2019, she was appointed as the special envoy on media freedom by the British Foreign and Commonwealth Office. She resigned from this role in 2020.

About Amal Clooney in brief

Amal Alamuddin is a Lebanese-British barrister at Doughty Street Chambers. She is married to film director and actor George Clooney. Her clients include Julian Assange, Yulia Tymoshenko and Nadia Murad. In 2019, she was appointed as the special envoy on media freedom by the British Foreign and Commonwealth Office. She resigned from this role in 2020. Alamuddin worked at Sullivan & Cromwell in New York City, for three years as part of the Criminal Defense and Investigations Group, where her clients included Enron and Arthur Andersen. She clerked under Judge Vladlen S. Vereshchetin from Russia, Judge Nabil Elaraby from Egypt, and ad hoc Judge Sir Franklin Berman from the United Kingdom. In 2013, Alamuddin was appointed to a number of United Nations commissions, including as adviser to Special Envoy Kofi Annan on Syria. She was also Counsel to the 2013 Drone Inquiry by UN human rights rapporteur Ben Emmerson QC into the use of drones in counter-terrorism operations. She has also lectured students on international criminal law at SOAS Law School in London, The New York School of Law, The Hague Academy of International Law, and the University of North Carolina at Chapel Hill. Her first name is derived from Arabic ʾamal, meaning ‘hope’ Alamuddin has three siblings: one sister and two half-brothers from her father’s first marriage. Her mother, Bariaa, is a political journalist and foreign editor of the Pan-Arab newspaper al-Hayat and a founder of the public relations company International Communication Experts, which is part of a larger company that specialises in celebrity guest bookings, publicity photography, and event promotion.

Her father, Ramzi Alamuddin, a Lebanese Druze from the Alamuddin family of Baakline, received his MBA degree at the American University of Beirut. He returned to Lebanon in 1991. She attended Dr Challoner’s High School, a girls’ grammar school located in Little Chalfont, Buckinghamshire. She then studied at St Hugh’s College, Oxford, where she received an Exhibition and the Shrigley Award. In 2000, she graduated with a BA degree in Jurisprudence. In 2001, in 2001, she entered New York University School oflaw to study for the LLM degree. She received the Jack J. Katz Memorial Award for excellence in entertainment law. She returned to Britain in 2010, when she became a barrister in London at Doughy Street Chambers, and is qualified to practise as a lawyer in the U.S. and the UK. She practised at international courts in The Hague, including the International Court of Justice and the International Criminal Court. She had been involved in high-profile cases representing the state of Cambodia, the former Libyan intelligence chief Abdallah Al Senussi and YuliaTymoshenko.

You want to know more about Amal Clooney?

This page is based on the article Amal Clooney published in Wikipedia (as of Dec. 09, 2020) and was automatically summarized using artificial intelligence.