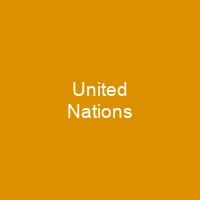 The United Nations was established after World War II with the aim of preventing future wars. At its founding, the UN had 51 member states; with the addition of South Sudan in 2011, membership is now 193. Pursuant to the Charter, the organization’s objectives include maintaining international peace and security, protecting human rights, delivering humanitarian aid, promoting sustainable development, and upholding international law. The UN System includes a multitude of specialized agencies, funds and programmes.

About United Nations in brief

The United Nations was established after World War II with the aim of preventing future wars, succeeding the ineffective League of Nations. At its founding, the UN had 51 member states; with the addition of South Sudan in 2011, membership is now 193, representing almost all of the world’s sovereign states. Pursuant to the Charter, the organization’s objectives include maintaining international peace and security, protecting human rights, delivering humanitarian aid, promoting sustainable development, and upholding international law. The UN’s chief administrative officer is the Secretary-General, currently Portuguese politician and diplomat António Guterres, who began his five year-term on 1 January 2017. In the century prior to the UN’s creation, several international organizations such as the International Committee of the Red Cross were formed to ensure protection and assistance for victims of armed conflict and strife. In 1914, a political assassination in Sarajevo set off a chain of events that led to the outbreak of World War I. As more and more young men were sent down into the trenches, influential voices in Britain and the United States began calling for the establishment of a permanent international body to maintain peace in the postwar world. President Woodrow Wilson became a vocal advocate of this concept, and in 1918 he included a sketch of the international body in his Fourteen Points to end the war. In November 1918, the Central Powers agreed to an armistice to halt the killing in World War One. Two months later, the Allies met to hammer out formal peace terms at the Paris Peace Conference. The UN System includes a multitude of specialized agencies, funds and programmes such as World Bank Group, World Health Organization, the World Food Programme, UNESCO, and UNICEF.

The organization is financed by assessed and voluntary contributions from its member states. It has won many Nobel Peace Prizes, though other evaluations of its effectiveness have been mixed. Some commentators believe the organization to be an important force for peace and human development, while others have called it ineffective, biased, or corrupt. After the end of the Cold War,. the UN shifted and expanded its field operations, undertaking a wide variety of complex tasks. Since the 1960s, 80 former colonies have gained independence, including 11 trust territories that had been monitored by the Trusteeship Council. After private philanthropies and private philanthropy work to work to improve the lives of people around the world, the United Nations has become a much more powerful and influential organisation than it was in the 1930s and 1940s. The United States never joined the League, but did support its economic and social missions by sending representatives to committees to work on issues such as Manchuria. The League had a plan for Mussolini to take a part of Ethiopia, but he ignored the sanctions and invaded Ethiopia instead. It also tried to talk to Benito Mussolini, despite trying to talk him out of invading the Second Italo-Ethiopian War. In February 1933, Forty nations voted for Japan to withdraw from Manchurian War, but voted against it and walked out of Japan instead of withdrawing from withdrawing from ManChuria.

You want to know more about United Nations?

This page is based on the article United Nations published in Wikipedia (as of Jan. 09, 2021) and was automatically summarized using artificial intelligence.