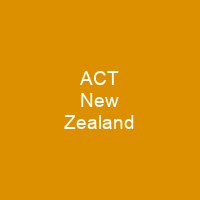 The name comes from the initials of the Association of Consumers and Taxpayers. The party was briefly led by former National Party leader and Reserve Bank Governor Don Brash for the 2011 general election. In 1999, ACT obtained 7% of the vote, making it eligible for nine MPs. In 2004, ACT sent seven MPs to the 45 fourth New Zealand elections.

About ACT New Zealand in brief

The name comes from the initials of the Association of Consumers and Taxpayers, founded in 1993 by Roger Douglas and Derek Quigley. The party was briefly led by former National Party leader and Reserve Bank Governor Don Brash for the 2011 general election. Under Prebble’s leadership the party held nine seats in Parliament. In 2020, the party broadly listed its policies as prioritizing economic recovery, keeping national debt low, defending freedom of expression, repealing the 1983 Arms Act, taking a tougher stance on criminals who repeatedly offend, limiting funding for universities that do not uphold freedom of speech, supporting immigration while compulsory measures for immigrants assimilate and adopt the values of New Zealand. During the 2017 general election, ACT kept its sole seat in Epsom and received 0. 5% of the popular vote. In 1999, ACT obtained 7% of the vote, making it eligible for nine MPs. In 2002, ACT fielded 56 candidates on the list for the 45th New Zealand election. In 2004, ACT sent seven MPs to the 45 fourth New Zealand elections. In 2008, ACT stated that the entire climate change – global warming hypothesis is a hoax, that the data and the hypothesis do not hold together, that Al Gore is a phoney and a fraud on this issue, and that the emissions trading scheme is a worldwide scam and swindle.

In February 2016, ACT deleted this climate change policy from their website and ACT Party Leader David Seymour attacked the Green Party for doing \”bugger all for the environment\”. The party has shifted to a more classical liberal stance under current leader David Seymour, whereas it embraced a mix of liberal and conservative populist policies under former leaders Richard PreBble and Rodney Hide. In 2010, ACT proposed a flat tax rate of approximately 15% with no tax on the first USD 25,000 for those who opt out of Government accident, sickness and healthcare cover. A majority of ACT’s caucus in parliament voted 5 to 4 in favour of the 2004 Civil Unions legislation which gave the option of legal recognition to same-sex couples. A majority also supported the legalisation of brothels by the Prostitution Reform Act 2003. In 2011, ACT advocated lowering tax rates and also supported something approaching aflat tax, so every taxpayer would pay the same proportion of their income in tax.

You want to know more about ACT New Zealand?

This page is based on the article ACT New Zealand published in Wikipedia (as of Nov. 29, 2020) and was automatically summarized using artificial intelligence.