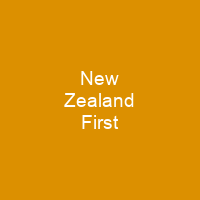 New Zealand First is a nationalist and populist political party in New Zealand. The party formed in July 1993 following the resignation of its leader and founder, Winston Peters, from the then-governing National Party. It takes a centrist position on economic issues and a social-conservative position on social issues such as criminal justice. In the 2020 election, all incumbent MPs, including Peters, will lose their seats in Parliament.

About New Zealand First in brief

New Zealand First is a nationalist and populist political party in New Zealand. The party formed in July 1993 following the resignation of its leader and founder, Winston Peters, from the then-governing National Party. New Zealand First takes a centrist position on economic issues and a social-conservative position on social issues such as criminal justice. It has frequently criticised immigration on economic, social and cultural grounds. It proposes an annual immigration cap of between 7,000 and 15,000’seriously qualified’ migrants, who would be expected to assimilate into New Zealand culture. In the 2020 election, all incumbent MPs, including Peters, will lose their seats in Parliament, with the party’s share of the party vote falling to 2.6%. The party has long advocated direct democracy in the form of citizen initiated referenda to create a democracy that is of the people and for the people. It opposes the privatisation of state-owned enterprises and opposes the sale of state assets. These views align it with views generally found on the left of New Zealand politics, such as the New Zealand Party and the National Party, which it has formed coalition governments with on three occasions since 1996 to 1998, 2005 to 2008 and from 2017 to 2020. It is closely associated with its policies regarding the welfare of senior citizens and its anti-immigration stance. It also espouses a mixture of economic policies and policies for New Zealand’s economic recovery, including the creation of a national bank and a national insurance scheme to protect New Zealanders from foreign direct investment. It supports popular referenda and has also advocated restrictive immigration-policies, including a cap on the number of migrants allowed to enter New Zealand each year and a limit on the amount of foreign workers allowed to work in the country.

It wants to protect the customs, traditions and values of all New Zealander’s and to put New Zealand and NZers First. It largely echo the policies that Winston Peters has advocated during his career, including its emphasis on preserving heritage and respect for national symbols. It had 17 members of parliament at its peak, following the first MMP election in 1996. It left parliament following the 2008 election in which it failed to gain enough party votes to retain representation. It increased its number of MPs to eleven at the 2014 election. It formed a coalition government with the Labour Party in the weeks following the 2017 election, In the 2018 election, the party dropped to nine members. In 2008, deputy leader Peter Brown drew widespread attention after voicing concern at the growth of New Zealander’s ethnic population. Peters quickly rebutted that Statistics New Zealand has underestimated the growth rate of the Asian community in the past decade. In April 2008, Peters voiced widespread concern after voicing concerns about the open door policy. Peters has called for resentment, division and friction, that will lead to the detriment of integration, and that will cause friction and division, he said. In 2004, he stated: “We are being dragged into the status of an Asian colony and it is time that New NZers were placed first in their own country’”.

You want to know more about New Zealand First?

This page is based on the article New Zealand First published in Wikipedia (as of Nov. 29, 2020) and was automatically summarized using artificial intelligence.