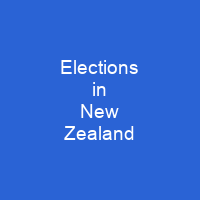 New Zealand is a representative democracy. Members of the unicameral New Zealand Parliament gain their seats through nationwide general elections, or in by-elections. The introduction of the mixed-member proportional voting system in 1993 was the most significant change to the electoral system in the 20th century. The electoral roll consists of a register of all enrolled voters, organised within electorates.

About Elections in New Zealand in brief

New Zealand is a representative democracy. Members of the unicameral New Zealand Parliament gain their seats through nationwide general elections, or in by-elections. General elections are usually held every three years; they may be held at an earlier date at the discretion of the prime minister. The introduction of the mixed-member proportional voting system in 1993 was the most significant change to the electoral system in the 20th century. The first party to win an outright majority since the introduction of MMP was the Labour Party, led by Jacinda Ardern, on the 17 October 2020. The electoral roll consists of a register of all enrolled voters, organised within electorates. All persons who meet the requirements for voting must by law register on the electoral roll, even if they do not intend to vote. People can provisionally enrol to vote once they turn 17, with them being automatically enrolled on their 18th birthday. Although eligible voters must be enrolled, voting in New Zealand elections is not compulsory. New Zealanders refer to electoral districts as \”electorates\”, or more colloquially as \”seats\”. Since the 2020 general election there are 72 electorates, including seven Māori electorates reserved for people who choose to place themselves on a separate electoral roll. All electorates have roughly the same number of people in them; the Representation Commission periodically reviews and alters electorate boundaries to preserve this approximate balance. From the South Island to the North Island, the ideal number of voters per electorate equals the population of the two main islands. The number of electorates increased by one compared to the 2017 election to account for the North’s higher population growth, creating Takanini; and the boundaries of 30 general electorates were adjusted.

The Electoral Commission, in their report on the 2017 general election, recommended that roll sales be discontinued for anything other than electoral purposes. The roll is used for legitimate purposes such as selecting people for jury service but it can be abused especially by marketing companies who use the electoral rolls to send registered voters unsolicited advertising mail. The first general and provincial elections took place in 1853, the year after the British Parliament passed the New Zealand Constitution Act 1852. Initially, New Zealand used the first-past-the-post electoral system, with New Zealand being the first modern country to do so. The system currently allows the total share of the vote in parliament to reflect the share of its population in its total parliament, with 49-large seats for 49-seat electorates and five-large electorates for 49 at-large. The most recent general election took place on 17 October 2019, and the next general election is scheduled for 17 October 2021. The current electoral system allows the population to vote for a single party to fill 49 out of the 49 seats in the 49- large electorate, which allows the party to make a total of 49 votes for the total vote in the total parliament. In terms of geography, electorates can have varying sizes as their boundaries are decided by the population living within the electorate. These elections used both single transferable vote and first past the post systems in 2007.

You want to know more about Elections in New Zealand?

This page is based on the article Elections in New Zealand published in Wikipedia (as of Nov. 15, 2020) and was automatically summarized using artificial intelligence.