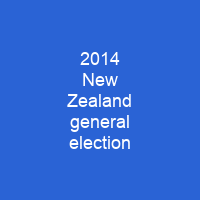 The 2014 New Zealand general election took place on 20 September 2014. Voters elected 121 members to the House of Representatives, with 71 from single-member electorates and 49 from party lists. The centre-right National Party gained a plurality with 47. 0% of the party vote and 60 of the 121 seats. The Māori Party, ACT, and United Future retained their Parliamentary representation, despite losing party votes.

The 2014 New Zealand general election took place on 20 September 2014. Voters elected 121 members to the House of Representatives, with 71 from single-member electorates and 49 from party lists. The centre-right National Party, led by incumbent Prime Minister John Key, gained a plurality with 47. 0% of the party vote and 60 of the 121 seats. The Māori Party, ACT, and United Future retained their Parliamentary representation, despite losing party votes. The Internet Mana Party did not return to Parliament after its only representative in Parliament, Hone Harawira, was defeated in his electorate of Te Tai Tokerau. A total of 2,446,279 votes were cast, including a record 717,579 advance votes, more than double the number cast in 2011. Turnout was 77. 90%, higher than the 2011 election, but the sixth-lowest since women gained the vote in 1893. National re-entered confidence and supply agreements with the centrist United Future, the neoliberal ACT Party, and the indigenous rights-based Makaori Party to form a minority government and give the Fifth National Government a third term. In May 2014 Judith Collins and John Key announced that no inter-party consensus existed on implementing the recommendations of the Commission, so the Government would not introduce any legislation. At the formal Opposition, Labour, New Zealand First and the Green Party are all in opposition, but only the Labour Party constitutes a formal Opposition. On May 31, 2013, the de-registered United Future caucus continued to sit as an Independent, meaning the NZ First caucus had seven MPs for the remainder of the Parliament.

One change was made to the allocation of seats during the Parliament, with the United Future Party gaining one seat each and ACT gaining one. In November 2012 a private member’s bill under the name of opposition Labour Party member Iain Lees-Galloway proposed implementing the first two recommendations; it was drawn from the member’s ballot on 14 November 2013, but by the time Parliament dissolved for the election, it was still awaiting its first reading. In the 2011 general election, 57. 8% of voters voted to keep the existing Mixed Member Proportional voting system, which had been largely unchanged since it was introduced in 1994 for the 1996 election. Normally, the House has 120 seats but extra seats may be added where there is an overhang, caused by a party winning more electorates than seats it is entitled to. On election night counts, the party appeared to hold the first majority since 1994 with 61 seats, but lost one seat to the Greens on the official count. The Green Party dropped in the vote share from 11. 1% to 10. 7%, but remained steady on 14 seats. New Zealand first meanwhile increased its vote share to 8. 7% and seat count to 11.7%. In May 2013, Brendan Horan was expelled from the Kiwi First caucus but remained in the parliament as an MP for the deregistered NZ First Party.

You want to know more about 2014 New Zealand general election?

This page is based on the article 2014 New Zealand general election published in Wikipedia (as of Nov. 24, 2020) and was automatically summarized using artificial intelligence.